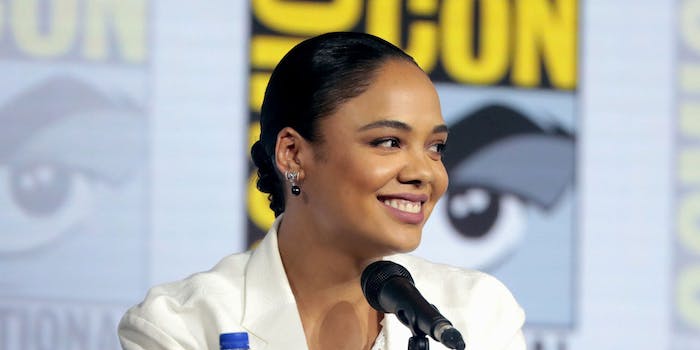 In 2018, Thompson said she doesn’t want to work with ‘a bunch of white people.'

Thor: Ragnorok actress Tessa Thompson is facing backlash from Marvel fans after remarks she made about inclusive movie sets in 2018 resurfaced in a YouTube video.

YouTuber MechaRandom42 made Thompson’s comments the center of a recent video titled, “Tessa Thompson, Way to Pull a Brie. Hope That Works out for Thor Love and Thunder.”

In November 2018, while on a promotional tour of Creed II, which stars Thompson alongside Michael B. Jordan, the actress commented on the diversity of cast and crew on movie sets.

The comments came amid 2017’s Me Too movement and heightened discussions around racial and gender diversity in the film industry. In 2018, the University of Los Angeles reported that women and people of color were not proportionately represented in acting, directing, and executive roles.

Despite the context, MechaRandom42 interpreted Thompson’s comments as anti-white and anti-men.

“Just because you said this a couple of years ago, doesn’t make it any less worthy of getting called out,” the YouTuber said. She notes that Thompson is good friends with Brie Larson and Natalie Portman, who have both been outspoken about promoting diversity.

The YouTuber goes on to say that “not liking someone based on the color of their skin or their dangly bits” is not inclusive.

In her original comments, Thompson clarified that she wants to see a movie set that’s indicative of the world.

“There are lots of people of color, look around,” she said at the time. “It’s also really exciting not just what we put on screen, but also to work on productions that are inclusive.”

The Thor actress added that there is more to inclusivity than just Black and white. “I want to show up on set and have it look like the world I walk around in every day, which is full of women, and people of color, and folk with disabilities,” she said. “I want to make content that feels like that both on camera and off it.”

“She sure made a mistake getting involved with a property based on Norse mythology then,” one Twitter use wrote. “I don’t think there’s a mythos more white-centric than that.”

The comment, like many others, miss the point: Thompson’s presence in the film makes it more diverse.

Thompson is set to reprise her role as Valkyrie in Thor: Love and Thunder, coming in February 2022.