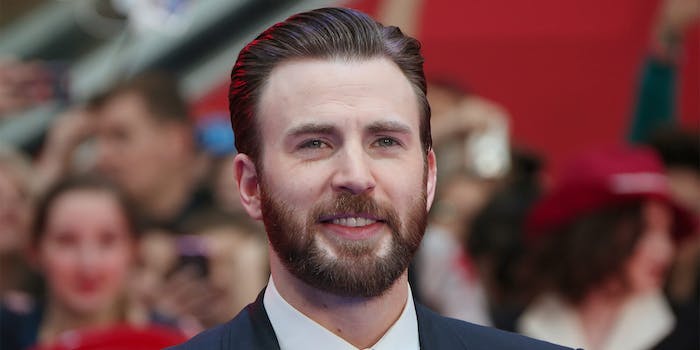 Chris Evans tried to give his dog a haircut, and it went hilariously wrong

Chris Evans—multi-hyphenate actor, real-life Captain America, vocal Donald Trump opponent—is a man of many talents. Apparently, dog grooming is not one of them.

Much like the rest of the United States (save for Wisconsin), the MCU star is stuck at home due to the ongoing coronavirus pandemic. This self-isolation can breed desperation and gross overconfidence in equal measures, leading people to attempt projects they normally wouldn’t dream of tackling. For Evans, that meant giving a haircut to his dog, Dodger.

Evans resurfaced on Instagram last week, and in his second post, he offered a glimpse of Dodger’s new ‘do. Judging by the glaring white patch on Dodger’s otherwise tan coat, it didn’t go well.

“I assured him I knew what I was doing,” Evans wrote on Instagram. “He seemed skeptical at first, but with the help of a few treats, I talked him into it. It went so wrong, so fast. I guess some things are better left to the professionals. (He hasn’t seen a mirror yet. I told him it looks great.)”

Lucky for Dodger, he won’t have to impress other dogs at the park anytime soon. And, let’s be real: Unlike humans, dogs look just as cute, if not cuter, with botched haircuts. Dodger seems to be coping fairly well with his style change, mostly sleeping off his sadness:

Next time, though, Evans should probably leave the grooming to the pros.