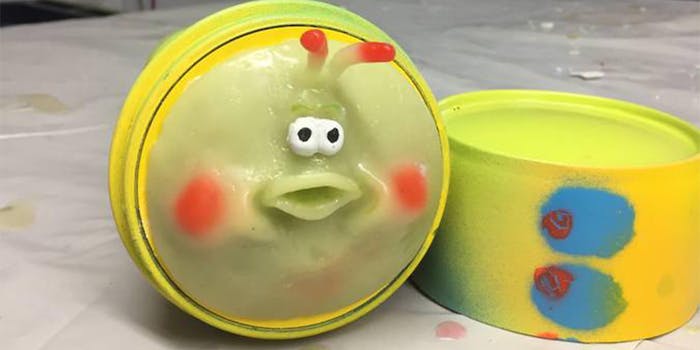 This ‘Bug’s Life’ fleshlight is here to ruin your childhood

This collector's item could be yours—for a price.

Sometimes a piece of pop culture ephemera surfaces and whisks you back to your childhood, allowing you to reminisce fondly on simpler, happier days.

This is not one of those times.

Austin-based artist Malek Lazri has created a sublimely grotesque new way for people to occupy themselves during quarantine: a Bug’s Life fleshlight. The sex toy is modeled after the 1998 Pixar movie’s character Heimlich, a thick, gluttonous caterpillar with plump lips and a long, ribbed body. Inspired by a Reddit meme of a similar concept, Lazri painted Heimlich’s multicolored exterior over the handle of an actual Fleshlight and crafted his face out of a silicone mold.

The ghastly result is available on eBay and Craigslist now. You can buy it outright on Craigslist for $2,000, while the auction starts at $2,000 on eBay.

“This is it, the holy grail, one of 4 in existence,” the ad reads. “1998 ‘a bugs life’ promotional fleshlight, never publicly released only given to a select few high ranking pixar executives for personal use. 100% satisfaction guaranteed very light wear, gently used, do NOT SLEEP on this one folks!!!”

Thus far, the Heimlech fleshlight has received zero bids on eBay, with a little over 12 hours left on the auction. It’s not for a lack of visibility, though: Earlier this week, the perverse piece of memorabilia appeared in a viral TikTok video that has since accumulated more than 400,000 views.

Prospective buyers should know that Lazri’s godless creation does not function as an actual Fleshlight, since it lacks an opening. It’s also not a piece of official Pixar-licensed merchandise, if you can believe it. Lazri told Vice he “would love” to receive a cease and desist from the animation company.