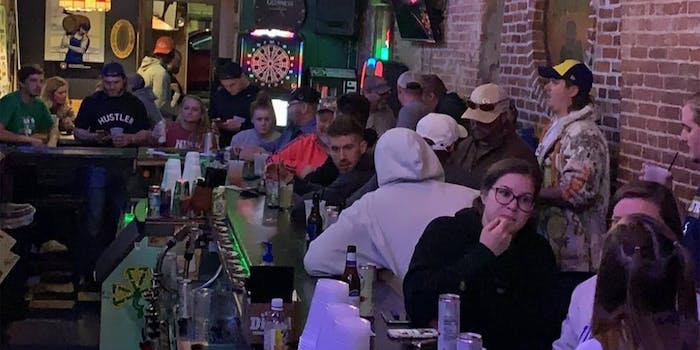 People celebrated the end of lockdown by drinking themselves into oblivion.

Wisconsin residents hit the bars with a vengeance last night—and the internet was not happy about it.

The Wisconsin Supreme Court’s conservative majority trashed the state’s stay-at-home order Wednesday night, prompting hundreds of patrons to celebrate by drinking themselves into oblivion. Unburdened by a totalitarian government hell-bent on mitigating the spread of a pandemic, the Cheeseheads held court at various watering holes, including Nick’s on 2nd, with nary a face mask or glove in sight.

“We’re the Wild West,” Wisconsin Gov. Tony Evers reportedly told MSNBC last night. “There is nothing that’s compelling people to do anything other than having chaos here.”

Those who weren’t celebrating the death of Wisconsin’s stay-at-home order were busy dragging partiers on Twitter.

“A huge, ripe F*CK YOU to the people in Wisconsin going out to the bars tonight because the state Supr*me Court trashed the Stay-at-Home order,” Twitter user @bretw321 wrote. “I would like to see my F*CKING family at some point in 2020 and meet my F*CKING nephew, DRINK ALONE YOU LOSERS.”

He followed up his initial tweet with a screenshot of a conversation with a friend who apparently went out drinking despite testing positive for COVID-19.

Several other Twitter users expressed their outrage over Wisconsin residents’ mad dash to the bars. Some of them captioned their posts with #RIPAmerica, which is the fourth-highest-trending hashtag in the U.S. at the time of this writing.

Keep an eye out for more civil, productive discourse regarding the state of Wisconsin’s reopened economy and recreational drinkers in the days to come.