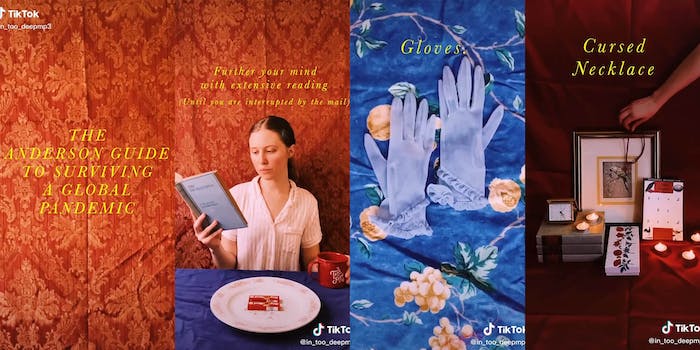 Madelaine Turner says the TikTok came from a place of 'deep love and respect.'

To create her Wes Anderson “guide” to surviving a pandemic, Madelaine Turner says she “mostly wandered around my apartment, grabbing random trinkets and seeing the story I could make out of what I had.”

This low-budget approach resulted in a faithful rendering of the Anderson aesthetic, produced during a time of prolonged isolation, edited to fit the parameters of TikTok.

Turner, 26, has been on TikTok since February, and had a few random hits. “Joining TikTok was definitely a quarantine-fueled decision, and the joke was always that I was way too old to be on it,” she says. But the Anderson TikTok got a bump this week, after it was posted to Twitter by @atticshape with the caption “this girl on tiktok just bodied wes anderson in one minute.” The clip has more than 2 million views and brought Turner a surge of new followers. The Twitter bump has become a viral pathway for TikTok creators. Turner even created a Twitter to respond to the comments.

While she says the word “bodied” made her laugh, Turner admits the TikTok was “Definitely done with a deep, deep love and respect” for the director.

“He has such a distinct visual style,” she says, “that most works that are brightly colored, textured, symmetrical, and devoid of overt emotion get labeled with ‘Wes Anderson vibes.’ When I initially thought to make the video, I had no idea it would reach the audience it did, so I wasn’t necessarily referencing his specific works, but the larger imprint he’s made in the collective culture.” She adds that she “definitely” had a “Wes Anderson phase.”

Turner has done some other pop-culture content—a parody of a “tense British drama,” a Sex and the City quarantine update—but she’s also had a lot more free time to see what works.

“I think most people find that as they get older and enter into the professional sphere, it becomes harder and harder to maintain those ‘frivolities’ that bring them joy,” she says. “When quarantine was enacted, there was a sudden absence of the external responsibilities I was normally saddled with. There was also this sense of ‘Why not?’ Why not start a TikTok? Why not make collages? Why not write music? Why not spend an afternoon filming a TikTok in the style of Wes Anderson?”

Turner says that TikTok was initially going to be a Sex and the City parody in the style of Anderson, but it proved too complicated for a DIY production. “Most of what I put online sort of follows my interests and ideas,” she says, “but I think my visual style is a lot less cemented and refined than the Anderson video.” While a wave of new views came from Twitter, so did criticism from Film Twitter types. Turner says that on Twitter, “the power lies with the critic.” Her experience on TikTok has been more positive.

“When I first started gaining traction, I had a lot of kids in high school and college connecting with me via DMs,” she says. They’d send me memes, talk about families, talk about school. I think it’s an app that supports connection. Even now, with the amount of traction the Wes TikTok got, the most negative comments on it are about my terrible British accent and the mic quality (both valid criticisms!).”

Still, Turner has a new audience and there’s “pressure” to produce “something that still feels authentic to what I find funny (or hope is funny), but will entertain as well.” To that we say: More Jennifer Coolidge TikToks.