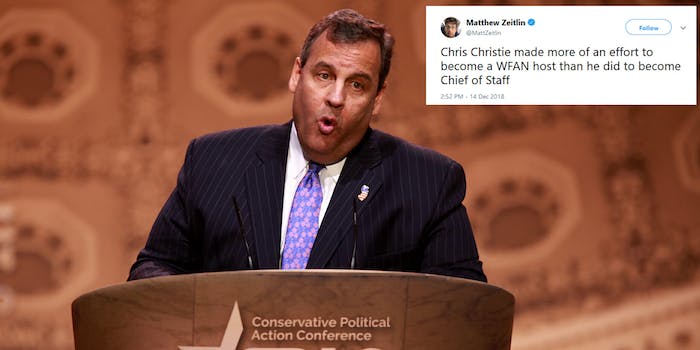 You can scratch former New Jersey Governor Chris Christie off the list of potential people who will become the next chief of staff for President Donald Trump.

The opening to replace Chief of Staff John Kelly has been subject to an enormous amount of speculation in recent days. But the list is now one name shorter.

The job was originally Nick Ayers, Vice President Mike Pence‘s chief of staff, to lose. But he bowed out of consideration for the post, and all hell broke loose. Even former Major League Baseball player Jose Canseco threw his hat into the ring.

Christie was reportedly a favorite after Ayers dropped out. However, like Ayers, the former New Jersey governor put an end to the rumors on Friday afternoon.

“It’s an honor to have the president consider me as he looks to choose a new White House chief of staff,” the former governor said in a statement. “However, I’ve told the president that now is not the right time for me or my family to undertake this serious assignment. As a result, I have asked him to no longer keep me in any of his considerations for this post.”

And again deleting clarifying earlier post, right statement this time – Christie was not offered the job, took himself out of running. pic.twitter.com/hIRUyIcHwh

Obviously, given Christie’s relationship with Trump—including his booting from the president’s transition team (and the meatloaf incident)—people online were amused, and even proud of Christe, for the recent turn of events.

Others re-purposed the photo of Christie on a beach that was taken during a government shutdown, where all other public beaches were closed.

When you've turned your phone off and aren't returning his calls. pic.twitter.com/2mV0040sms

Chris Christie had to turn down Trump's Chief of Staff offer because he's already accepted a seasonal job… pic.twitter.com/m0ItllyNdk