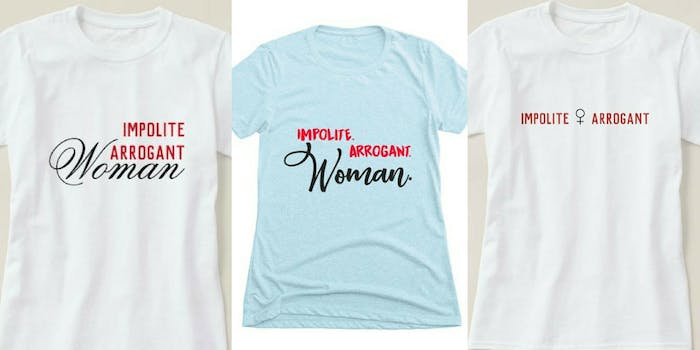 In the email, which was sent to Department of Homeland Security senior counselor Kevin Carroll in February 2017, Kelly also characterized Warren’s behavior as “blah blah blah.” BuzzFeed News obtained Kelly’s email, among thousands of others, from Homeland Security as part of a Freedom of Information Act lawsuit.

Warren, who initially declined BuzzFeed News’ request for comment, told writer David Dayen that around that time, she had tried to get in contact with Kelly multiple times regarding President Donald Trump’s Muslim nationals ban, and eventually pushed him to give her a better contact number for him after denying that Warren had ever tried to get in touch with him in the first place. She connected that to his “impolite arrogant woman” comment about her, theorizing that Kelly didn’t like that she was “tough on” him.

It’s really all OK though, because we have a shirt that will stick Kelly’s message right back at him, and show that us women are impolite and arrogant! We are impolite, and arrogant, and proud! And we are not afraid to shout Kelly’s insults from the rooftops in wild resistance! Oh, won’t he be sorry he ever wrote that Warren was talking a bunch of “blah blah blah” in the first place!

Oh hell yes, I'm an #ImpoliteArrogantWoman. I bet you are too. Get a t-shirt here: https://t.co/Qrulm26z8N Read the original article in which Chief of Staff Kelly called Elizabeth Warren an "impolite arrogant woman" here: https://t.co/I3uOOcz6U3 pic.twitter.com/JEvOaj4wjj

Hell yeah, I’m an impolite, arrogant woman, too! And this very bold red font paired with the feminine curls of the word “woman” is getting that message across.

Love being an an impolite arrogant woman https://t.co/DrzGrKjgnp

I am being sarcastic, to be clear. I’m not excited about another line of resistance shirts that showcase insults uttered by a man in power at a woman in power. I don’t need another witty (and perhaps cheaply and questionably made) reminder of the ways in which men do not take women seriously. I am not here for this.

I do understand the proclivity to re-appropriate yet another insult hurled at someone who is supposed to represent and protect your interests. When then-Republican presidential nominee Donald Trump called Democratic presidential nominee Hillary Clinton a “nasty woman” in 2016, you bet I bought a shirt with the phrase screenprinted across the chest. I was less than a month away from turning 23, living briefly in New York City, and very inspired to Do Something—but not something that took much effort.

The black fitted tee, which I had purchased from an Austin-based illustrator whose work I still love, came in the mail just days before the election. I might have worn it on Election Day, or the day before, but it hung in my closet for another year, until I used it as a Halloween costume: a lazy, semi-political callback to the 2016 election that attempted to be ironic but just came off as sad. It’s hanging in my closet still, the reflective rose-gold lettering casually reminding me to wear it whenever I leaf through my wardrobe for an expendable shirt to throw on.

When Mitch McConnell tried to make an example out of Warren last year, lecturing her about how “nevertheless, she persisted,” my interest in insult reappropriation waned. I didn’t want to adorn another quote spoken by a man who doesn’t respect or listen to women, and I certainly didn’t see it as inspiration for younger generations to keep persisting. Fewer than three months into the Trump administration, I was over kitschy stick-it-to-the-man attire quickly produced that, while done in the name of “resisting,” came with questionable ethical consumerism as far as who these funds were benefitting, and who these shirts are choosing to quote (white men) about which other people (white women).

After spending the past two years heavily covering and following politics and policy, I am exhausted by this practice. I’m not saying this language or behavior of men should be discounted or brushed off, or that I want to police the ways people express their protest and solidarity. Kelly’s comments, and similar comments, should be taken seriously, with people being held accountable for what they say. But with these shirts, it almost feels like we’re celebrating these awful characterizations while they’re still newsworthy. May “impolite arrogant woman” be the final nail in the insult-spiration coffin.