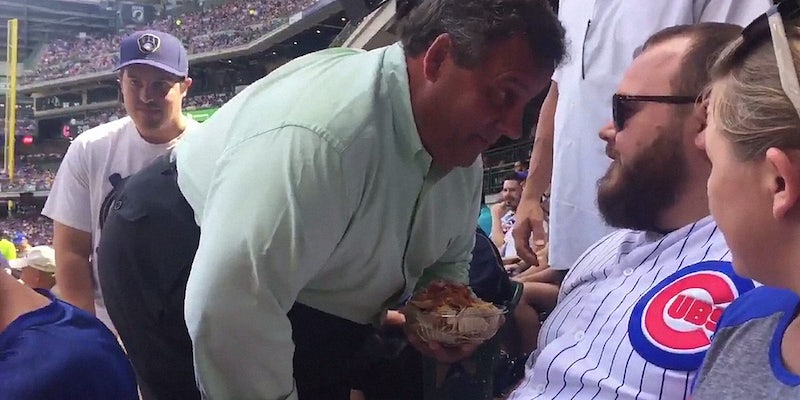 Not a single nacho was harmed.

New Jersey Gov. Chris Christie has built his reputation as a no-nonsense politician who’s not afraid to get in the face of his constituents or of anyone he believes has somehow wronged him. If Christie feels insulted, he WILL go out of his way to confront you—even if it means his nachos will get cold.

Just ask this Chicago Cubs fan who yelled at Christie during Sunday’s game in Milwaukee. Christie responded like you might expect, leaning into the fan’s personal space and asking him if he wanted to act like a big shot.

At #Cubs #Brewers game. #ChrisChristie was getting razzed by fans, so he got in the face of one of them. 5:30 on @WISN12News pic.twitter.com/sx8euMgFy2

The fan, Brad Joseph, then told Christie, sarcastically it appears, that he appreciated that sentiment. Joseph told WISN that, as Christie walked by him, Joseph told him that he “sucked.”

“I called him a hypocrite because I thought it needed to be said,” Joseph told the TV station. “He then turned around and walked all the way back toward me and got up in my face for what seemed like a long time, but was probably only about 30 seconds or a minute.”

Joseph said Christie asked if he wanted to “start something.”

“First he told me, ‘Why don’t you have another beer?’ which I thought was a decent comeback, and I thought that was kind of funny,” Joseph said. “Then he started calling me a tough guy.”

Naturally, the internet loved the confrontation.

Rule Number 1 – Don't talk shit to Chris Christie when he hasn't had a single one of his nachos yet pic.twitter.com/MjK7j6UpF7

Chris Christie just proved it's impossible to look tough with your pants pulled up to your chest. pic.twitter.com/TGpQPrd0OU

Chris Christie, at this point, just go ahead and untuck your shirt.

This is the most Chris Christie picture ever. It's like he commissioned someone to take the one photo that summed up his entire life. pic.twitter.com/TWjjoTZSWZ

Christie’s son, Andrew, works for the Milwaukee Brewers. Christie himself is still the governor of New Jersey, at least for the next six months before his term ends. After that, he’ll be free to go to as many ballgames as he wants, inhale as many nachos as possible, and confront anyone who has a cross word to say to him. For Christie, it’ll be even better than a day at the beach.