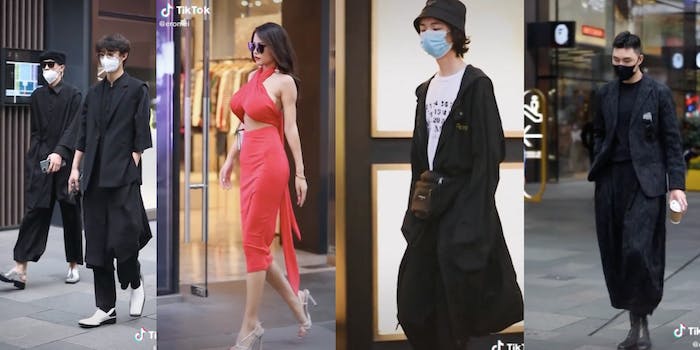 People are completely obsessed with Chinese street style on TikTok

The fits are impeccable.

Although the newest TikTok trend isn’t a viral dance, prank, or challenge, it’s quickly proving to be a crowd favorite.

TikTokers across the world are fascinated, and maybe a bit envious, of videos showing off Chinese street style. The new trend has swept over the app in the last couple of weeks.

A Chinese street style TikTok typically shows people walking casually through cities in high-fashion fits ready for the runway. There are all-black, goth looks, styled-up traditional clothing, well-fitted suits, and much more. The people in the unbelievable outfits will at times wave, wink, or stare directly into the camera. The videos are set to music that makes their movements even more dramatic and jaw-dropping.

There are a couple TikTokers who are making the compilation videos. Some of the most famous videos come from TikTok user @eromei. Her most popular video has almost 20 million views with nearly 4 million likes.

The video shows people walking through what appears to be an outdoor shopping center to the song “I Like Him.” The video launched the trend to mainstream popularity on the social media app, prompting people to question who is filming these incredibly fashionable people?

The viral TikToker told Teen Vogue that she found the videos from Douyin, China’s version of TikTok. She told the news organization that influencers purposely dress up to go to shopping districts where paparazzi are waiting to take their picture and record them.

Even if it is planned, it doesn’t seem to lessen anyone’s interest in the fits. People in other countries have used the videos as inspiration to try out their own bold looks. A quick scroll through the hashtag #Chinesestreetstyle and #Chinesestreetfashion will bring up hundreds of people trying out the trend at home.