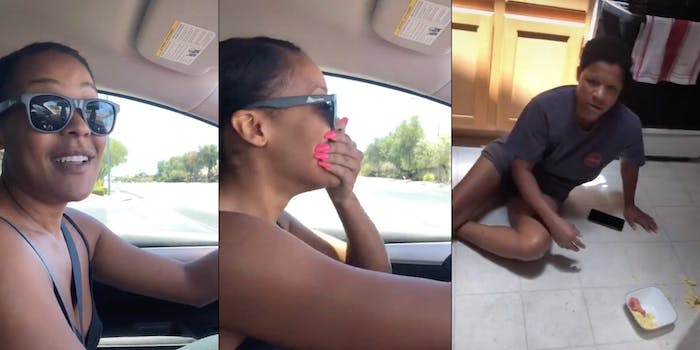 Teens are convincing their parents to lie to cops—and on the floor.

TikTok users are tricking their family members with a new “speeding prank” that involves lying about being pulled over by the police and asking family members to fake injuries.

The pranks, which all follow the same structure, begin with the content creator calling their family member and telling them they were just pulled over by the police for speeding. The creator then tells the family member that they lied to the officer, saying they were speeding home to help an injured family member. The pranker asks their family member, usually a parent, to pretend to have fallen.

Jaden Green posted their version of this prank on TikTok Sunday and accumulated over 11.2 million views.

“I need you to like lay down on the floor, please, and act like you fell,” Green tells her mom on the phone.

“Why the fuck would you do that?” her mom responds. But when Green gets home, her mom is laying on the kitchen floor, and she even spilled food on the floor for added effect.

After Green bursts into laughter, rage and disappointment fall over her mom’s face. “You are so wrong,” her mom says. “What I do for my kids.”

Green told the Daily Dot that she’s been flooded with “nice” reactions to her video. “They said she is the best mom in the world for this,” Green said.

The video was uploaded to Twitter and received 468,000 likes, with some posting memes of her mom’s reaction to the prank.

Others are raising concerns about police brutality. One user wrote that “this really isn’t the time.”

Other TikTok users are involving their children in the initial phone call.

One TikTok user pranked her father, and he texted her saying, “This is not something to joke around about I hope you’re serious.”

But to many, the speeding pranks are comedic gold. One person tweeted that the videos are giving them life.