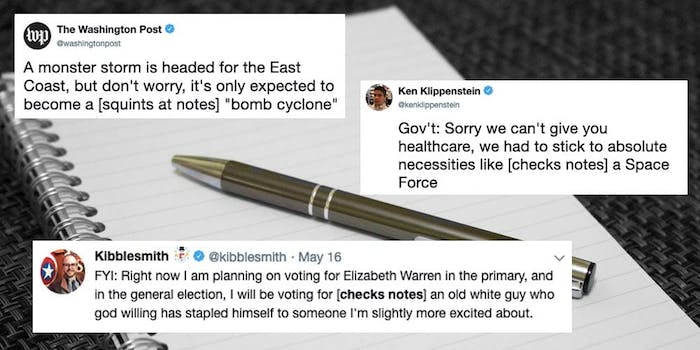 If you've got to check your notes, you may not like where this is going...

The world is a dumb, fucked up mess, and our inevitable trajectory to was set into overdrive on June 16, 2015, when a reality TV star with bad hair and an ill-fitting suit descended a gaudy golden escalator to announce his candidacy for President of the United States. To cope in this brave new world we’re living in, many have understandably turned to humor, and—for better or worse—this is what we have to thank for the “checks notes” meme.

How did the ‘checks notes’ meme start?

Although the joke format has been around for some time, its usage became widespread when Donald Trump became president. Since then, the lines between real life and the Onion have increasingly blurred, with headlines like the Department of Energy recently rebranding “fossil fuels” as “freedom gas.”

Essentially, the “checks notes” meme (or sometimes “squints at notes,” “squints at teleprompter,” etc.) is a way to interject humor or sarcasm into a situation that might otherwise make one cry, by suggesting that an individual is forced to check their notes or research to confirm that this is, indeed, real life, before proceeding with an announcement.

The phrase is typically written within asterisks, brackets, or parentheses to denote the action of stopping to check notes—as you can see in a handful of examples below.

Weird Twitter seer Dril even used an early version of the meme a couple of years ago.

Has the ‘check notes’ meme gone too far?

Now, the joke format is ubiquitous, and you’ll be hard-pressed to open Twitter on a normal day and not see someone use it. Free Dictionary even has an idiom entry on it.

Some would argue that the “checks notes” meme has become overused at this point–so much so that Slate even penned a piece last year making a fair case for the meme to die an honorable death. The author argues that “checks notes” is “incredibly overdone” and points out that part of the obnoxiousness stems from the fact that it tends to be employed by men more so than women:

Ubiquity is never a good sign for a joke, but beyond that, there’s an annoyingness to *checks notes* as a gag. It probably resides in its connection to #resistance Twitter and politics reporter Twitter, two dark, overlapping vectors of self-righteousness and thirst, made worse by their overwhelming maleness.

Given the examples above, that would certainly seem to be the case. (Looking at you, Washington Post.) And yet, the meme persists.

The “check notes” meme format was also used in a handful of Game of Thrones-related tweets last month:

Sansa: attributes her character growth to being raped and abused
Brienne: is now a desperate rom-com character
Missandei: the show’s only Black woman character and is *checks notes* murdered while in chains pic.twitter.com/2YrVZSoZNs

At the end of the day, whether someone wants to check their notes is their own prerogative. Just please remember to check responsibly.