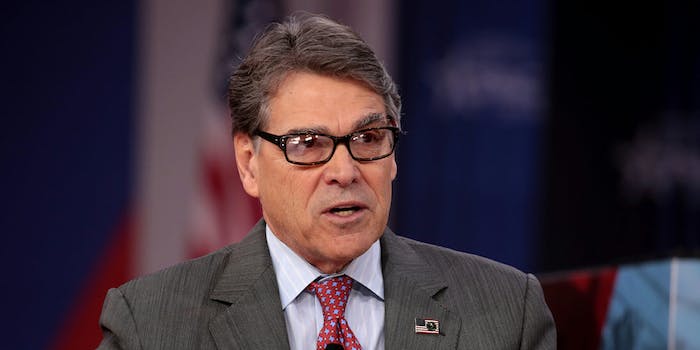 The Department of Energy (DOE), headed by Rick Perry, referred to natural gas exports as “freedom gas” and “molecules of U.S. freedom” in a press release, garnering numerous jokes from people on social media.

DOE Under Secretary of Energy Mark Menezes used the first term—which evoked the use of “freedom fries” to describe french fries in 2003—in a press release issued earlier this week.

“Increasing export capacity from the Freeport LNG project is critical to spreading freedom gas throughout the world by giving America’s allies a diverse and affordable source of clean energy,” Menezes said in the release.

“I am pleased that the Department of Energy is doing what it can to promote an efficient regulatory system that allows for molecules of U.S. freedom to be exported to the world,” Winberg said.

The use of the two terms to describe natural gas caught the eye of people on social media, including 2020 Democratic presidential hopeful Jay Inslee.

“This has to be a joke. (Remember freedom fries?)” Inslee tweeted on Wednesday. “Freedom gas? Freedom is generally good, but freedom from glaciers, freedom from clean air, freedom from healthy forests that aren’t on fire, and freedom from the world we know and cherish is not what we seek.”

But Inslee wasn’t the only one.

The Department of Energy has been busy re-branding and looking to beat out "Freedom Fries" for the dumbest thing ever peddled by the US federal government. Ladies and gentleman, I give you "freedom gas" and "molecules of U.S. freedom." https://t.co/AE9JN4qY2W pic.twitter.com/wkfMyRibel

Freedom gas. When you have to check the article under a Twitter trend to see if it's from The Onion and you find out it's just a real thing the Trump administration is doing. I feel like turning this in to The Onion they'd be like "nope this is a little too ridiculous." pic.twitter.com/JBh9yOMiSY

The US Department of Energy has declared fossil fuels to be "Molecules of Freedom" and "Freedom Gas".#NotTheOnion pic.twitter.com/ZDDLuDF3eG

"Freedom gas", "Molecules of U.S. Freedom" — The Trump administration reached for a new level of absurdity and got there. https://t.co/7RrNimQmzn pic.twitter.com/ydkY1WFwMs