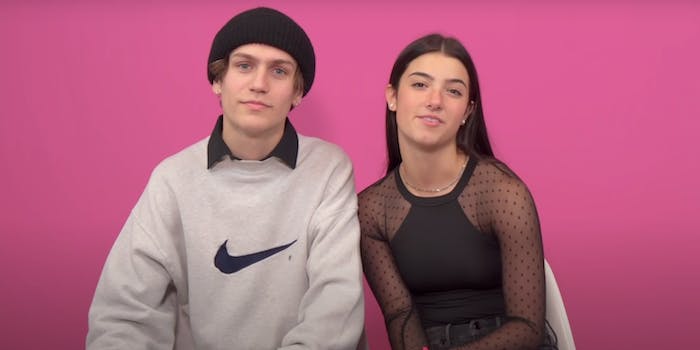 There’s trouble in paradise at Hype House and Sway House, the Los Angeles mansions that function as TikTok content hubs and, lately, breeding grounds for drama.

Several high-profile TikTokers last night put the heat on Chase Hudson, known on the platform as Lil Huddy. Hudson dated Charli D’Amelio, TikTok’s biggest star, for three months earlier this year, and some fans speculated they might rekindle their relationship. Hudson seems to have blown any chance of a reunion, though, when he admitted to kissing TikToker Nessa Barrett.

Hudson copped to kissing Barrett in a since-deleted statement on Twitter. He apologized to D’Amelio and insisted that he didn’t kiss Barrett until after they broke up.

“The only person who had a right to be upset with me is Charli and I’m sorry I hurt her,” Hudson wrote.

The 18-year-old TikTok star didn’t just issue an apology, though. He also aired out the dirty laundry of his fellow Hype House and Sway House stars, accusing them of all sorts of infidelities.

Here are just a few of the trysts Hudson exposed in his statement:

“Anthony [Reeves] got with Cynthia [Parker] a week after we broke up on tour.”

“Jaden [Hossler] actively tried to hook up with Dixie [D’Amelio, Charli’s older sister] at our house on the 4th of July in front of me while she was dating Griffin [Johnson].”

The list goes on. Hudson also said he is “not sorry to Josh,” Barrett’s ex, because the two “are not boys and we haven’t been boys since he lied to Charli saying I had an STD 6 months ago trying to get her to stop seeing me.”

Hudson’s statement prompted many TikTokers to unfollow him on social media, while several of the people he named slammed him on Twitter.

“Stop deflecting you’re [sic] actions into others because you can’t take responsibility chase,” D’Amelio tweeted Monday night. “Want me to talk about how you treated me throughout our relationship or do you just want to continue to play the victim?”

Dixie took her sister’s side, writing, “Ur wild. Stop playing the victim and worry about yourself.”

Parker also slammed Hudson, tweeting, “During our relationship all I wanted was for chase to own up to his OWN mistakes and issues. This is so private and unessarary [sic]. Instead of throwing everyone else under the bus own up to you’re [sic] own shit, somehow you’ve dated 2 minors that are STILL more mature than you’ve ever been.”

Hall was also not impressed by Hudson’s statement.

“Chase has BIG twitter fingers but cried in person when Josh and Jaden confronted him,” Hall tweeted. “Let’s just remember that you will see us again soon bud.”

Johnson did not address Hudson’s claims but issues a simple directive: “Someone get this kid off the internet.”

Shortly after midnight, Hossler seemed to announce that he and Hudson had worked out their beef.

“We talked. No fighting. It’s settled,” he tweeted. “I was heated asf but now I’m calm bc talking can resolve everything. It’s over.”

There’s still no word on whether D’Amelio and Hudson have patched up their relationship. Rather than further stoke the flames of controversy on Twitter, D’Amelio followed up her response to Hudson with links to a Black Lives Matter donation card and a list of other world issues that need more public support.