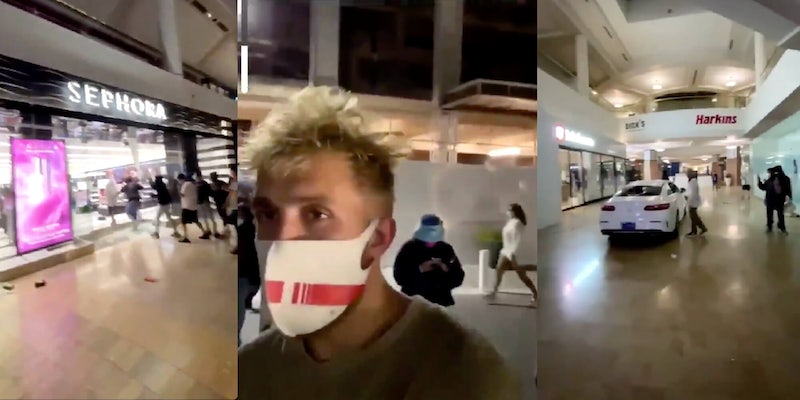 Videos seem to put Paul at Fashion Square in Arizona, where looting was taking place.

Update 12:38pm CT, June 4: Jake Paul has been charged with criminal trespassing and unlawful assembly, according to ABC 15. After receiving “hundreds” of tips, local authorities say the 23-year-old YouTube star remained inside a Phoenix-area mall after it was closed. His charges are both misdemeanors.

Update 3:46pm CT, May 31: After more videos emerged, including one of Jake Paul holding a stolen bottle of Vodka, the YouTuber released a statement on Twitter. “Neither I nor anyone in our group was engaged in any looting or vandalism,” he wrote. “We were strictly documenting, not engaging. I do not condone violence, looting, or breaking the law.”

Videos seem to put Jake Paul at Fashion Square in Arizona, where looting was taking place on the fifth night of protests, sparked by the killing of George Floyd.

While Paul cannot be seen taking anything in the footage, the YouTuber was accused of looting and setting off fireworks with his friends.

Paul was also criticized by people for not actually being there to protest systematic racism and police brutality. “He’s a millionaire looting while people are outside protesting, getting shot with rubber bullets, teargas, beat by cops,” one tweeted.

It remains unclear why Paul was at the mall, but some slammed him for seemingly filming protesters’ pain and suffering for YouTube content. Many brought up his brother Logan Paul’s notorious “suicide forest” video. Back in 2018, Paul filmed—and later posted—the body of a suicide victim in Japan’s Aokigahara forest.”Jake Paul films himself looting during protests of the murder of an innocent black man,” one user said. “The Pauls are the embodiment of white privilege. Profiting off of others suffering and getting away with it.”

While Paul hasn’t posted any content related to the videos that went viral, he did post to his Instagram Story that police teargassed him to the point his eyes started bleeding and pointed their guns at him. “F*ck you guys,” he says in one video, flipping the police off. “Rest in peace, George Floyd.