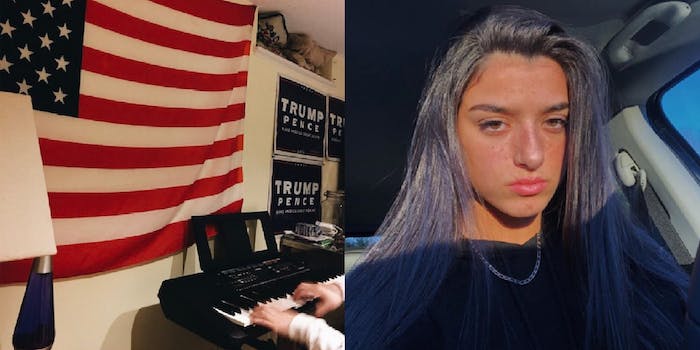 Someone dredged up a 2017 photo from her VSCO account that shows the TikTok star in a room with multiple Trump-Pence campaign signs on the wall.

TikTok star Dixie D’Amelio said she’s receiving death threats after an old photo surfaced of her in a room with multiple Trump-Pence campaign signs on the wall.

The picture, shared by a fan in a tweet, was originally posted to D’Amelio’s VSCO account in 2017. In the photo, the teen is playing the piano in front of a large United States flag. Three Trump-Pence signs with the “Make America Great Again” slogan hang next to the flag.

“Not dixie damelio having a picture of an american flag and the trump/pence flag on her vsco,” the fan who resurfaced the photo tweeted.

The 18-year-old said the controversial photo wasn’t even taken in her house.

D’Amelio’s videos, which normally show her dancing or doing something funny, regularly amass tens of millions of views on TikTok. With 23 million followers and more than half a billion total likes, the teen is one of the platform’s biggest stars. Dixie is also the older sister of Charli D’Amelio, who currently holds TikTok’s top spot.

Within a few hours, D’Amelio defended herself publicly in a tweet. The teen, who is now of voting age, said she’s an independent voter who “will always vote for the person and never the party.”

“I find it sad that i have received death threats due to inaccurate speculation of my political belief. i have never supported trump. period,” she continued.

“I’ve BEEN SAYING white celebrities that are silent about their political views are never good news!!” @bluedanni4 said in a tweet.

While she has received backlash for the resurfaced photo, many are also defending the TikTok star and say that threatening someone for their political views isn’t OK.

Even if D’Amelio did support the president it’s possible her views changed, some said.

Meanwhile, D’Amelio seems to be trying to move on from the photo buzz by flooding her timeline with… frog pictures.