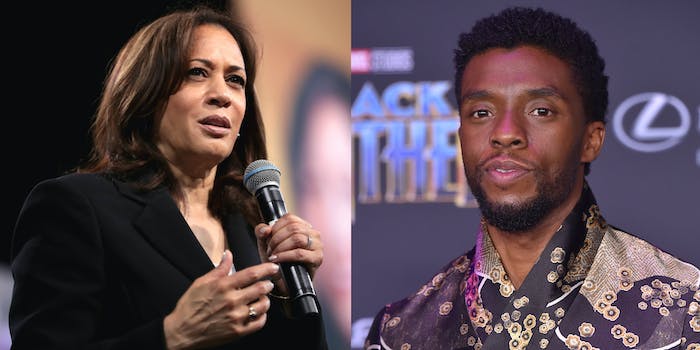 Following the news of Chadwick Boseman’s death on Friday, people began expressing their shock and love for the actor in posts on Twitter. Among the wave of tributes to the late actor, who has starred in Black Panther, Da 5 Bloods, 42, among others, were some pointing to his final tweet.

In Boseman’s final tweet, posted on Aug. 11, he celebrated Sen. Kamala Harris (D-Calif.) after she was picked to be former Vice President Joe Biden’s running mate in the upcoming presidential election.

“YES @KamalaHarris! #WhenWeAllVote #Vote2020,” he wrote, along with a photo of himself and Harris embracing.

Among the notable offenders who quote-tweeted the post, pointing out that it was Boseman’s final one, were CNN’s Jake Tapper and Ana Violeta Navarro-Cárdenas, journalist Yashar Ali, and producer Kyle Griffin.

“[right after someone dies] i need to go viral,” Twitter user @bad_takes wrote, along with a screenshot of Griffin’s tweet.

Another simply wrote “Vultures,” including screenshots of all the posts.

“Trying to get viral off someone’s tragic death is levels of online I can’t even aspire to,” journalist Ken Klippenstein wrote, seemingly referring to the alleged clout chasers.

The users are all being similarly criticized under the replies to their posts, with some urging them to stop “politicizing his death” and to “Delete this NOW.”

A tweet shared on Boseman’s account by his family Friday night revealed that he had been battling stage III colon cancer since he was first diagnosed in 2016. He was surrounded by family when he passed away at age 43.

Harris responded to the news with a photo of herself and Boseman from the same event Boseman’s photo came from.

“Heartbroken. My friend and fellow Bison Chadwick Boseman was brilliant, kind, learned, and humble. He left too early but his life made a difference. Sending my sincere condolences to his family,” she tweeted, noting that they are both Howard University alumni.