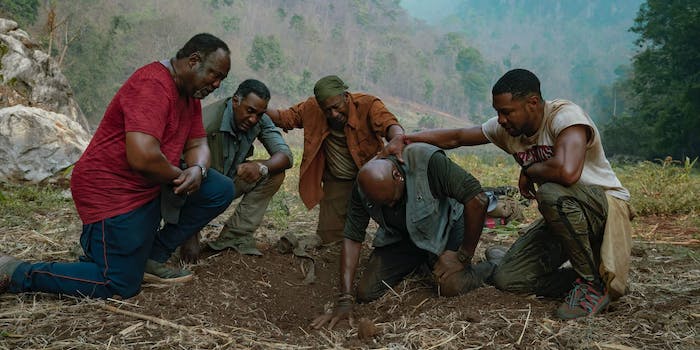 ‘Da 5 Bloods’ confronts the ghosts of Vietnam from Black veterans

Early in Da 5 Bloods, the four Black veterans at the center of Spike Lee’s new war epic gripe about the types of Vietnam movies that get made; one of the characters describes the phenomenon as “them Holly-weird motherfuckers trying to go back and win the Vietnam War.” If Hollywood made a film about a real Vietnam hero like Milton Olive III, the first African-American soldier to win the Medal of Honor during the Vietnam War after he jumped onto a grenade to save the lives of other soldiers around him, one of them says, he’d be the first guy in line to see that movie.

RELEASE DATE: June 12, 2020
DIRECTOR: Spike Lee
STREAMING: Netflix
Decades after the end of the Vietnam War, four Black veterans return to Vietnam to locate the remains of their beloved squad leader—along with a chest full of gold they buried together.

Although Da 5 Bloods is an original story, Lee (with a script he wrote with Kevin Willmot, Danny Bilson, and Paul DeMeo) comes close to achieving that. It’s a sharp and uncompromising retrospective of the Black men who were often put through hell by fighting in a senseless war only to be on the receiving end of vitriol after they returned home—as well as vilified because of centuries of racism in the U.S. Blending genres, memories, fever dreams, and even aspect ratios to differentiate the different timelines, it’s at once a vital history lesson, an explosive and intense heist movie, a sprawling character study, and an examination of colonialism, racism, and greed.

The film’s opening montage draws two of the biggest events of the ’60s and ’70s—the Vietnam War and the Civil Rights movement—together as footage of people like Muhammad Ali, Angela Davis, Malcolm X, Kwame Ture, and Bobby Seale is mixed with police brutality on college campuses and the atrocities committed in Vietnam; in Davis’ case, the connection is explicit.

It’s a connection that the Viet Cong even tried to take advantage of as Hanoi Hannah (Veronica Ngo) used the radio airwaves to challenge Black soldiers on why they’re fighting for a country that doesn’t see them as equal. She even highlighted the fact that Black soldiers are disproportionately represented among the armed forces in comparison to the U.S. population, a nod to many of the white men who used college as an excuse to dodge the draft.

For Paul (Delroy Lindo), Otis (Clarke Peters), Eddie (Norm Lewis), and Melvin (Isiah Whitlock Jr.), it’s complicated. Their squad bonded while they served in Vietnam, led by their squad leader Stormin’ Norman (Chadwick Boseman), the kind of man who was a friend, a father figure, and a mentor all in one—his legend amplified in the decades since he died—while also encompassing the very essence of cool with a single look. But Vietnam irrevocably changed them, they were attacked as “baby killers” when they made it home, and the decades of systemic racism since weren’t kind to them either.

Like The Irishman, Da 5 Bloods uses the same actors in both the Vietnam flashbacks and present-day, but there’s no de-aging technology to be seen. It takes a scene or two to get used to, but by the end, it’s hard to imagine it working as well with different (and younger) actors.

When they finally reunite in present-day Vietnam, a lot has changed. Eddie’s name comes with wealth and power (e.g. he’s a big Black Lives Matter supporter) and he tries to use his Amex card to treat his friends right, but the smokescreen isn’t as clear-cut as it seems. Otis, the medic of the group, attempts to keep everyone together, but they notice his reliance on Oxycontin and joke about the opioid pandemic. Melvin has a stable home life, but in Vietnam, he’s able to let loose more. And Paul, a staunch Donald Trump supporter who admitted to voting for the guy, is suffering from PTSD but won’t get help for it and is paranoid to the point of mistrusting almost everyone around him—even his own son, whom he keeps at a distance.

Officially, Paul, Otis, Eddie, and Melvin are in Vietnam to collect the remains of Norman so that he can be properly laid to rest at Arlington Cemetery. They refuse to take their local guide Vinh (Johnny Trí Nguyễn) with them further than they need to, but they have an ulterior motive for that. They’re attempting to locate a case full of solid gold bars, which the U.S. once used to pay indigenous informants during the way, that they found and buried during one of their tours.

Keeping the gold was Norman’s idea, who described the bars as reparations; he wanted to put that money toward Black liberation. The U.S.A., Norman—who the others called “our Malcolm and our Martin,” elevating him to another level—said, owed them. As Norman pointed out in one of the film’s flashbacks—which is presented in a 3:4 format, giving it a similar feel to the TV footage that brought Vietnam into people’s homes—and one of the many real history lessons he gave them, the first person to die in the American Revolution was a Black man named Crispus Attucks.

Because of the sheer amount of gold they’re trying to collect, they have to loop in Desroche (Jean Reno), a shady French businessman and Tiên (Lê Y Lan​), a businesswoman and former sex worker who Otis had a fling with during the war to transport that money without the government catching onto them. And at the last minute, Paul’s son David (Jonathan Majors) manages to work his way into getting a cut, but he’s also concerned about his dad’s mental health. And things get a lot more complicated once they take off, looping in echoes of John Huston’s 1948 film The Treasure of the Sierra Madre, proving that no matter their morals or intentions, that gold was always going to corrupt.

Da 5 Bloods spends plenty of time exploring the intricate layers of how even though Vietnam (or the American War, as Vinh calls it) may have been decades ago, it never really leaves those who lived it. It tears families apart, it can subject the children fathered by soldiers to years of scorn and ridicule, and the guilt about what a person or their family did and didn’t do can be overwhelming. Hedy (Mélanie Thierry), the French heiress who is part of an organization dedicated to diffusing landmines and bombs, notes that part of the reason her family amassed their fortune is that they exploited the hell out of the Vietnamese people. Paul’s ghosts seem to follow him wherever he goes. Terence Blanchard’s score is in a near-constant conversation with Marvin Gaye’s 1971 album What’s Going On, which is from the point of view of a Vietnam veteran who comes home from the war only to find a much different country than the one he left.

The ease in which Peters, Whitlock Jr., Lewis, and Lindo play off each other is infectious from the get-go. They could easily pull off a road trip comedy, and their chemistry goes a long way to make Da 5 Bloods work, even when it might drag a bit or leave some characters underdeveloped. But Lindo’s Oscar-worthy performance will stick with you. He’s haunted and scorned; he feels enraged, betrayed, scared, and confused all at once. And he can switch between several different modes at the drop of a hat.

As Paul monologues directly to the camera, you can feel his earned anger and anguish; in other scenes, you sense the walls begin to close in on him. His MAGA hat, which is mocked by his friends, is an instantly potential instigator, one that takes a life of its own simply because of what it means off the screen; Lee, who hasn’t shied away from his criticism of Trump, knows this. Paul dares you to look on, and while you might despise him, you also can’t look away.

The end of BlacKkKlansman famously linked Lee’s movie about a Black police officer who infiltrated the Ku Klux Klan to today by including footage of Heather Heyer’s murder by a white supremacist during a protest in Charlottesville, Virginia and Trump’s assertion that there were “some very fine people on both sides.” But with Da 5 Bloods, Lee doesn’t need to invoke Trump’s own words (though footage of one of his rallies does make a brief appearance) or even a last-minute addition of recent footage of anti-racism protests and police brutality to make his point. Those speeches might’ve been uttered more than 50 years ago, but they resonate just as much now as they did then. Despite how much things might’ve changed, we only need to look out our doors or at our phones to see just how much has stayed the same.