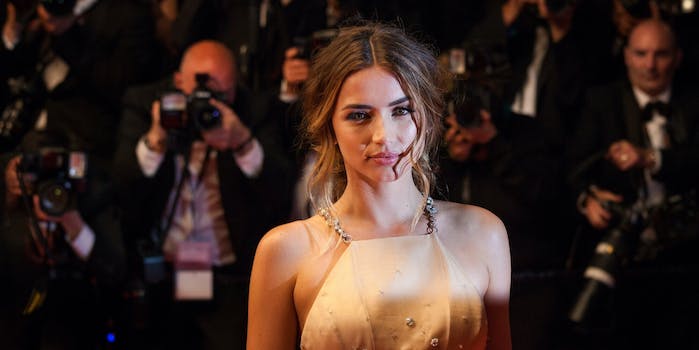 Or, how not to get blocked by your idol.

In April, Knives Out actress Ana de Armas betrayed her most loyal: She blocked @ArmasUpdates, a Twitter fan account dedicated to her with more than 13,000 followers.

AJ, a man from Texas, who declines to give his last name because he said other de Armas fans hate him, started the account in November 2019. Like similar fan accounts, AJ posts de Armas’ career news, photoshoots, and more. But maybe where he crossed a line in de Armas’ eyes was when he added some commentary to his tweets.

AJ guesses it was his April 12 tweet that set off de Armas. In it, he captioned a paparazzi shot of de Armas and her boyfriend, the actor Ben Affleck, with a joke that they were walking their dogs outside “instead of praying for the pandemic to go away.” Soon he was blocked.

“I was taken aback at first because it’s one of the people that I admire and someone I idolize so it hurts in a way but at the same time, oh, she acknowledged me,” AJ said. “She had a reaction to what I was saying and obviously at the same time, she made a statement by doing that and I thought that was funny and it made me like her more. Like, yeah, ‘This guy is annoying me, so I’m going to make something about it,’ and I was like ok, I get it, I’m annoying.”

De Armas’ publicist did not respond to a request for comment.

Fan accounts appear on all social media platforms—Twitter, Instagram, Tumblr, Facebook—and even though fans run them for free independent of the celebrity and the celebrity’s team, there are unwritten rules and a code of ethics when it comes to running these kinds of accounts.

When to tag celebrities

AJ definitely doesn’t tag de Armas in tweets now, but he said he didn’t before mainly because her Twitter account doesn’t allow for it to be tagged in photos.

Sebastián, who declined to give us his last name, runs @DobrikOnline, a Twitter fan account for David Dobrik with more than 9,000 followers, and said he only tags the YouTuber when Dobrik has accomplished something big.

“When it’s a big accomplishment like passing a certain amount of followers or he will go on Jimmy Fallon, or he’ll do a big collaboration, I’ll tag him so more people will see it,” Sebastián said. “And he will usually like it.”

Meghan Lloyd, a Taylor Swift fan, said she used to tag Swift in Tumblr posts because she was desperate to meet the pop star, but now that she has met Swift twice, Lloyd hardly tags Swift from her Twitter fan account @babyouremyqueen. Lloyd’s account, which has more than 4,000 followers, isn’t an update account; instead, she posts memes and jokes related to the singer.

When are paparazzi shots OK?

Before de Armas and Affleck began their daily paparazzi-shot strolls, AJ said he found photos of the two leaving a New Orleans movie theater but didn’t feel comfortable sharing them because it appeared they didn’t want to be seen.

“I don’t want to exploit her personal life at all,” AJ said. “If I find a really personal picture, I would not post it. But when I started seeing the pap strolls coming in and she was in designer ware and it was her and Ben just parading around the street, I just thought I feel like she would want this to be out there.” It also helped that they became Instagram official.

Lloyd doesn’t see any issue posting pap shots of Swift unless Swift is using her common tactic of covering herself with an umbrella or if a cameraman has peered over a fence to get a shot.

Cece Cruz, who runs a website, Twitter, and Instagram dedicated to actress Vanessa Hudgens, said she avoids pap shots of Hudgens going to a doctor or the hospital and if any non-famous family members or kids are in the shot, she doesn’t post them.

What is a personal life?

Hudgens has been public with her romantic relationships in the past, which allowed Cruz to update her accounts on Hudgens’ ex-boyfriend Austin Butler. When they announced their breakup in January, Cruz moved the website’s Butler photos from the Family tab to the Miscellaneous tab.

“I didn’t want to put her personal life out there,” Cruz said. “I didn’t want to be invasive. So anything regarding a relationship, friendship or anything like that, I don’t share or comment on it until it’s official.”

When Hudgens was seen with NBA player Kyle Kuzma that same month, Cruz ignored it.

“She’s single; she can see who she wants,” Cruz said.

And even though Swift hasn’t been exactly public with her romantic relationship, Lloyd said she only posts about the “superficial stuff” regarding Swift and boyfriend Joe Alwyn.

“I’ll post photos or interviews or lyrics, but I don’t really delve into his life or go searching his non-famous friends’ Instagrams or Facebook for clues,” Lloyd said. “And I don’t assume to know anything about their relationship or lives that they haven’t shared themselves.”

When to go negative

Melissa Rae, who chooses to only go by her first and middle name online, created @justcatchmedemi, a Twitter fan account for singer Demi Lovato, in 2010. In the account’s 10-year history, she’s amassed more than 125,000 followers and built a team of six fans to help run the account from different time zones. Even though no one gets paid for the account, Melissa said they treat it like a job.

“We’re here to support (Lovato) and if she wouldn’t want something out, we’re not going to make people aware of it,” Melissa said. “We’re just going to kind of pretend it doesn’t exist and hope other people don’t know because we’re not giving it some form of extra publicity.”

“If she has a private Instagram and she’s posting on that one, we’re not touching it, we’re not going near it,” Melissa said. “We’re only sharing things from her official @ddlovato account.”

Cruz shares that sentiment about her Hudgens fan account. When Hudgens went live on Instagram a few months ago and made insensitive remarks about coronavirus, (“Even if everybody gets it, like yeah, people are going to die, which is terrible… but inevitable?”), Cruz didn’t acknowledge it.

Sebastián agrees and said he usually won’t comment on any drama Dobrik is involved with.

“When it’s drama I think is completely stupid for lack of a better word, I will just keep my mouth shut,” he said. “I won’t give it the attention I think people who start drama usually demand.”

However, he did announce on the account that he would include commentary with his tweets. For instance, Sebastián tweeted one of Dobrik’s TikToks and wrote, “this has 21 million views on tik tok and it’s bothersome to me.”

Even though celebrities don’t typically have a say in what fan accounts post, Cruz said she is mindful of Hudgens and her feelings. Cruz said she regularly DMs with Hudgens and they even went live together on Instagram at the beginning of the month. Cruz said Hudgens requested that Cruz not keep the Live up after it was done.

Lloyd’s timeline is full of tweets admiring Swift, while also poking fun at the singer in a light-hearted way.

“I don’t know that I’ve ever sat down and thought of a line, but I think that anything I personally would find harmful if it was about myself (I don’t post), anything about physical appearance or that sort of thing,” Lloyd said.

Once de Armas blocked AJ and his account, he wasn’t sure what to do.

“I don’t want to make her look bad of course,” AJ said. “The whole blocking thing—I debated on whether to post that or not because that would make her look bad, but it’s funny at the same time. At the end of the day, I have to respect her as a fan account, so I wouldn’t post anything in a defamatory way.”

Paige Skinner is a journalist from Texas.