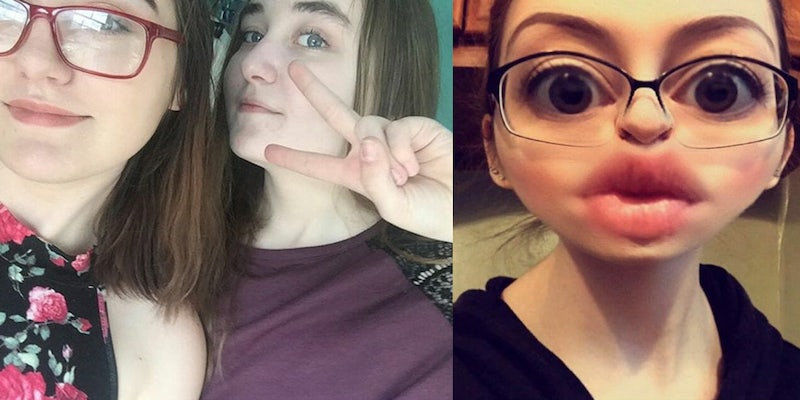 Inside Finstagram, the private world of ‘fake’ teen Instagram accounts

Instagram is seemingly designed to inspire jealousy. It’s where people post filtered photos of their brunch, latest vacation, or a fancy new outfit, all lit and framed in a manner that suggests everything in their life is as perfectly composed as the images in their camera roll.

According to a 2015 study by Pew Research Center, 92 percent of teens go online daily, and nearly 24 percent say they are constantly plugged into social media. While Facebook remains the most popular social media site, Instagram is right behind it, with more than half of all teens (61 percent are girls) actively checking it. That creates a lot of pressure to post photos that garner validation in the form of likes, and with so many people watching, it can feel far too manicured and staged. We’ve all likely seen those photos of carefully placed table arrangements and girls laughing with champagne flutes at a rooftop bar you weren’t invited to.

But there’s another side of Instagram that’s steadily growing in popularity, one that’s hidden slightly beneath the surface and behind private usernames, where the photos are far more spontaneous and revealing. It’s called #Finstagram, and it’s chock full of the types of images teens don’t want you to see.

me, scrolling through my finstagram and laughing at my relatable captions and saying "me" out loud

A Finstagram, or “finsta” for short, is a “fake Instagram” account. The accounts are typically private, with usernames that don’t give away the identity of the owner right away. The term was created and popularized by high school teenagers, but the fad has moved to the college scene as well. It’s mainly used to free people up from the confines of a traditional account, making them feel better about posting ridiculous memes, ugly selfies of their friends, and anything else that crosses their mind. It’s more fleeting like Twitter, less permanent than Facebook.

In other words, it gives teens and students the opportunity to act like teens, to show their real personality without disrupting their aesthetic—or having parents or possible employers seeing them.

“Finsta is a place for stories about waking up late, having negative dollars in your bank account, or posting captions like ‘I’m an excellent housekeeper, every time I leave a man I keep his house,'” said Casey Reilly, 19, who goes to Townson University in Maryland, who keeps her finsta private.

Reilly defines finsta as roasting exes and funny memes; she doesn’t let “boring people” follow her because she doesn’t have time for that type of “negativity.”

The definition of Finstagram differs significantly depending on who you ask. “A finsta is definitely your moon sign,” said Tochukwu Okafor, 22, an international relations major at the University of Texas at Austin. “Who you are emotionally and whatnot: quirks, stress, sadness and all.”

Okafor uses finsta to post her outfits of the day and photos of others in her life who are slaying their style. Her last post was a collage of her most recent online searches, which included what type of cat to adopt for people with cat allergies, Kit Harrington, and someone’s birth chart.

Axel Samaniego an 18-year-old high school student in Houston, Texas, uses his finsta to showcase his photography and random things he sees throughout the day. It’s not that dissimilar from a typical Instagram account, but it’s more random and personal. He says it’s safe to assume that most high schoolers have one. “Yeah, I would say it’s popular cause now the cheerleader-type girls have them now,” Samaniego said.

But teens haven’t abandoned their regular Instagram accounts. That’s what they call “Rinstagram,” or a “real Instagram.”

So I GUESS A REAL INSTAGRAM IS A RINSTAGRAM? I REALLY HATE YALL

“I hate to say it but regular insta, for most people, I think, is something very meticulously curated, even if it’s not that obvious or even if they set it to private,” said Okafor. “It’s like your rising sign, what people see and go ‘ahhhh nah ima pass’ or ‘okay I fuck with it/like this person on some level.'”

Many teens now have two different profiles: Rinstagram for impressing the people around them, and Finstagram for entertaining themselves and goofing off. You could argue that Rinstagram is only amplifying some of the social issues teens face—the private accounts inherently leave some people out, the Instagram equivalent of a cool kids table at the cafeteria—but most seem to feel it’s helping create a healthy balance in their social-media lives.

Can we discuss the importance/need for a finstagram/rinstagram please

“People are so worried about what everyone thinks [on Instagram],” Reilly said. “Who cares?”

The kids on Finsta’s don’t, that’s for sure.