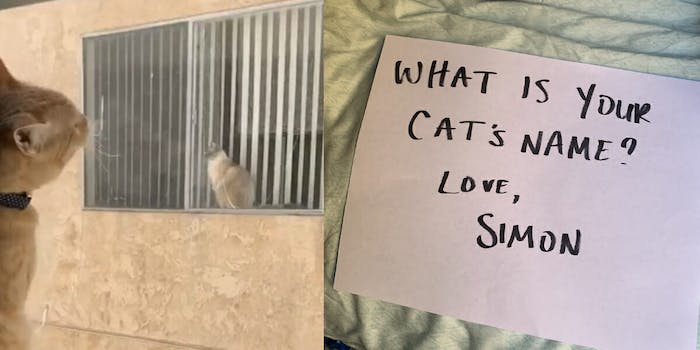 People are crying over these cats’ window-sill romance

This is 2019's greatest romantic comedy.

Spring has sprung, and everyone’s mind has turned to love. Sure, love is indeed a splendid thing between human beings, but it’s even more delightful when it’s between two fluffy cats.

On Monday, Twitter user @kenziecoffman, who goes by “Mac” on Twitter, tweeted some pictures of her cat Simon who has become enamored of a cat living across the street. Simon has even taken to waiting in the window all day for him to appear. Apparently, this had gone on long enough that she made a sign that read “What is your cat’s name? Love, Simon” and hung it in her window. Her neighbors, who are no doubt aware of the star-crossed lovers’ window rendezvous, wrote back. “Hi Simon, I’m Theo. Your my best friend – Theo”.

My cat Simon is in LOVE with my neighbor’s cat and waits all day for him. Will keep y’all updated pic.twitter.com/Jh1Hrg2WYz

Dear Simon and Theo, this is the kind of news we need everyday to get through life. Thank you. Love, A Fan ❤️

This is so cute this tweet better go viral we- pic.twitter.com/omaS1OV4da

this is quite possibly the only thing that has ever mattered to me https://t.co/pHljgKCWGW

your cat has a greater emotional and romantic life than me what the hell pic.twitter.com/shPgdRuEP7

Simon when Theo wrote back. pic.twitter.com/T9fCHllU3S

Also for those of you worried about Theo’s grammatical mistake, it’s been corrected. We all know how things like that can make or break a budding relationship when you’re first messaging each other.

Mac vowed to keep us updated and, so far, she’s been true to her word.

She’s already posted a prequel video showing the pairs first meeting (that she knew about anyway), and Simon’s birthday party that was attended by both Theo and his owners, albeit from across the gap with their windows open.

Of course, what everyone is really dying to know is when, if ever, these two love cats are going to get together.

Obviously, you need to buy a long plank to build a catwalk. 😻

This is the biggest will they/won’t they situation since Jim and Pam almost got divorced on The Office. Will Simon and Theo ever get married? If so, will there be a season about them trying to adopt kittens but things get complicated when Theo gets offered a job overseas?

All we know right now is that there are plans in the works.

Shall do! Waiting for a response to my new sign lol

The Daily Dot has reached out to Mac via her Twitter account and, obviously, we will keep you updated if there are any developments in 2019’s greatest love story.