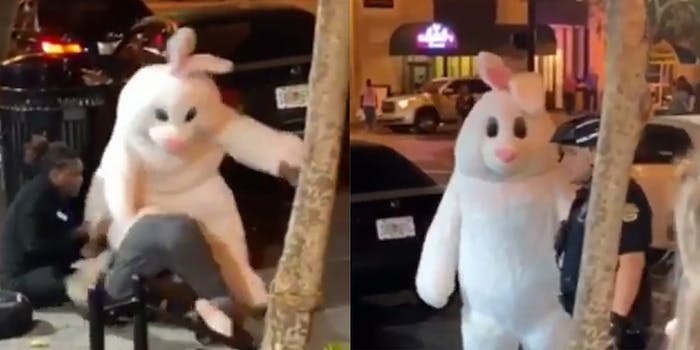 Nothing says “The son of God, who died to wash away our sins, has risen from the dead” like watching a full-grown adult in a bunny costume punch a man in the face in downtown Orlando Florida.

A video which surfaced last night shows a man and woman fighting on the sidewalk outside of an Orlando bar called the Underground Public House. Although the woman is clearly dominating her opponent, at the beginning of the video we see a person dressed in an Easter Bunny costume hop into the fray, punching the man on the ground.

Unsurprisingly, several people with cell phones were filming the incident, but a video from someone who goes by “workfth” on Instagram, which provides a clear shot, has been getting a lot of attention.

“HAPPY EASTER” reads the caption “Only in #ORLANDO”

The fight ends when a police officer and a man in a green shirt, who appears to be an employee of the bar, arrive to break up the fight. After a little dancing around, the bunny and the guy in the green shirt exchange a handshake.

The video leaves us with far more questions than it answers. What were the man and woman fighting about? At one point, someone can be heard yelling “He spit on her!” but if that’s true it wasn’t captured in the video. Why did the bunny get involved? Did the person in the costume know the man in the green shirt or did they both just agree that the guy on the ground deserved a good pummeling?

Although we don’t know the backstory, people online have been enjoying the video strictly based on its goofy appearance. A different video of the same incident, this time posted to Twitter, has already been viewed over a half million times.

I can only guess at what happened shortly before this, but I know what will now happen for the rest of that guy's life…

"Hey bruh, remember that time you got beat down by the Easter Bunny?"

Every bunny was Kung fu fighting!
I'll see myself out… pic.twitter.com/1chkCH9U81

The Daily Dot has reached out to the Underground Public House, via their website, to see if they can shine any light on this bizarre situation.