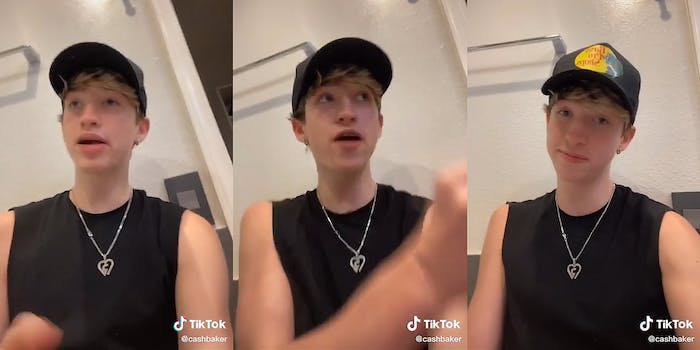 'Making up false gods and prophets is a sin in the Bible.'

TikTok teens are no strangers to controversy, and 17-year-old influencer Cash Baker recently faced a wave of backlash after saying he doesn’t support the LGBTQ community or other religions.

Who is Cash Baker?

Baker is a popular TikToker and musician, making up one-half of the musical duo Cash and Maverick alongside his 19-year-old brother, Maverick Baker. The brothers have released a handful of singles over the last two years, with their most popular, “The Way You Move,” generating more than 3.5 million Spotify streams.

Cash’s TikTok account includes lots of typical teen content, including viral challenges, pranks, and monologues about nothing particularly substantial. But the teen star, who is an avowed Christian, has also dedicated much of his account to talking to his followers about his faith. Some of those talks landed him in hot water last week.

Why are people mad at Cash Baker?

Baker infuriated some viewers with a series of TikToks over the past week in which he said he did not support the LGBTQ community or members of other religions because they were “sinners.”

“Guys, in the Bible it says that one sin is as equal as all sin, and it says man should be with woman and woman should be with man,” Baker continued. “So therefore, guys, yes, it is a sin in the Bible. But guys, everyone sins. I sin all the time. That does not mean I love you any less or look at you any different.”

In another video, Baker said he did not support people who practice other religions such as Islam, Hinduism, and Judaism “because the Bible says that” and accused those religions of creating “false gods and prophets.”

“Making up false gods and prophets is a sin in the Bible,” Baker said. “If you get mad at this video and you’re telling me that I’m not respecting other religions, then you’re not respecting my religion, because in my religion, it tells me to tell you that.”

Many viewers slammed Baker’s videos and accused him of being homophobic, Islamophobic, and anti-Semitic.

Baker attempted to clarify his statements in another TikTok a few days later. Yet while Baker said he didn’t “disrespect” members of the LGBTQ community or people of other religions, he doubled down on his sentiment that he didn’t support them.

Baker said his friends and supporters advised him to stop posting such controversial videos. He added that he hemorrhaged followers and saw a decline in his views after sharing his convictions.

“So a lot of my friends and supporters and everyone have been like, ‘Stop preaching the gospel. You’re going to get canceled,’” the teen star said. “I mean, that might be true. Like, I’ve already lost thousands and thousands of followers. Brand deals probably won’t want to work with me as much because I’m preaching the gospel and I’m too problematic.”

Nevertheless, Baker said he remains committed to sharing his version of the gospel—even if that version includes telling people they’ll go to hell for practicing another religion.

“Tell me this: If you believed in a hell, and you believed that some of your family and some of your friends, even people you don’t know, might go to hell and burn in hell for the rest of eternity—would you tell them about it, or would you just stay quiet and not say anything?” Baker asked in a different TikTok. “You would most likely tell them about it, right? And that’s what I’m doing.”

One of Baker’s more recent TikToks features him kissing a girl with the caption “It’s ok cuz we are only 3rd cousins.”