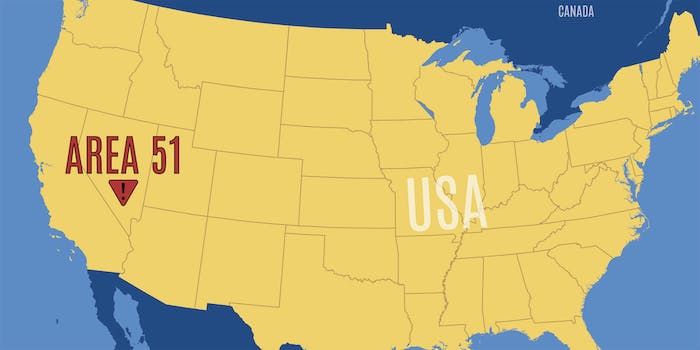 'They Can’t Stop All of Us' was weirdly resonant.

One of the most striking elements of Wednesday’s riot at the U.S. Capitol by militant Trump supporters was how easy it seemed for them to get into the secured building. That inspired a number of people to take to Twitter to propose making another attempt at getting into the fabled Area 51.

In July 2019, a public Facebook event scheduled for that Sept., proposing that people “storm Area 51,” drew more than 400,000 pledges to attend, and an additional 400,000-plus indicating they were “interested,” within just a couple of days. Those numbers eventually grew to more than 2 million claiming to go and more than 1.5 million interested as the date loomed nearer.

Though the event clearly appeared to be a joke—the event title, after all, was “Storm Area 51, They Can’t Stop All of Us”—the joke might have gone a little too far for some. As the Daily Dot reported back in Sept. 2019, two YouTubers were arrested for trespassing near where the rumored Nevada-based alien research site is thought to be, while the creator of the event publicly distanced himself from an ancillary AlienStock concert planned to coincide with the event.

But after people witnessed remarkable scenes from the Wednesday storming of the nation’s legislative hub, including a Trump supporter taking a selfie with a cop inside the complex and a fur-adorned QAnon figure standing on the House of Representatives dais, some reasoned, “Why not give Area 51 another shot?”

Another person joked, “Me and the boys going to Area 51 after seeing how easy it was to get in the Capitol building.”

Another simply assessed, “This tells me we def could’ve stormed Area 51.”

One person referenced Spongebob Squarepants to draw contrasts between security at the two locations (though it’s not the only Spongebob-related Area 51 tweet getting traction).

Another went to the well of local news coverage from Alienstock to ask, “Why didn’t ya’ll (sic) bring this ‘Storming the gates’ energy with you to Area 51!?”

And someone celebrated Nicolas Cage while tweeting, “The Area 51 memes are back and I’ve never been happier.”