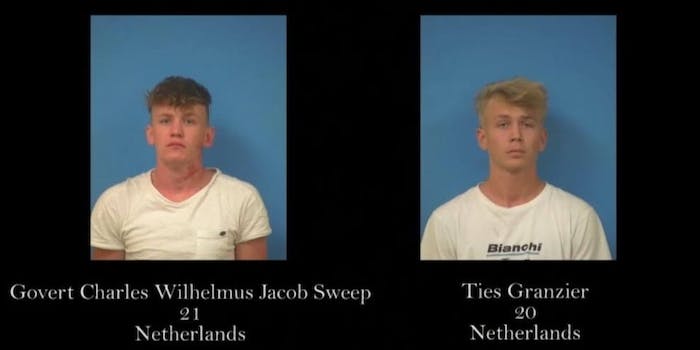 Despite the fact that the original architect behind the “Storm Area 51” event is distancing himself from the Facebook joke, a couple of YouTubers allegedly got off to an early start on exploring the classified area. Now, both have been arrested.

According to the Daily Beast, Ties Granzier—a YouTuber from the Netherlands who has more than 735,000 subscribers—was arrested along with another YouTuber on Tuesday for allegedly trespassing in an area near Area 51, the classified site in Nevada which has long been married to alien conspiracy theories.

This summer, a 21-year-old named Matty Roberts made international news by posting a Facebook event called “Storm Area 51, They Can’t Stop All of Us“ in which he wrote “We will all meet up in rural Nevada and coordinate our parties. … Lets see them aliens.” That post has more than 2 million who have replied that they’re going and another 1.5 million who said they’re interested in the Sept. 20 event.

Naturally, it led to a variety of memes. This week, though, Roberts changed his mind on the main part of the event, a festival dubbed Alienstock, and said he would move it to downtown Las Vegas, telling the Las Vegas Review-Journal, “It was either going to go one of two ways. We saw the red flags and we pull out, or we could have ignored those and have it turn into a Fyre Festival 2.0 on our hands. That’s not something I want to be part of.”

But that didn’t stop the 20-year-old Granzier and 21-year-old Govert Charles Wilhelmus Jacob Sweep (who has more than 300,000 YouTube subscribers) from allegedly exploring the rural Nevada desert on their own.

Earlier on Tuesday, Granzier posted an Instagram photo from the Grand Canyon and wrote he was headed to Area 51 for an adventure along with an alien emoji.

Police said they discovered them three miles into Nevada National Security Site property. Both reportedly admitted they could read English but ignored the “Do Not Enter” signs at the facility. Granzier allegedly told police he was a YouTuber, and they found cameras, a laptop, and a drone in their possession. Granzier also allegedly allowed police to view the video footage he had already taken before they were arrested and booked into the Nye County jail.

Update 1:47pm CT, Sept. 18: The two YouTubers pleaded guilty to misdemeanor trespassing and illegal parking, and they were sentenced to three days in jail, according to Sky News. The pair also were fined $2,280 apiece.