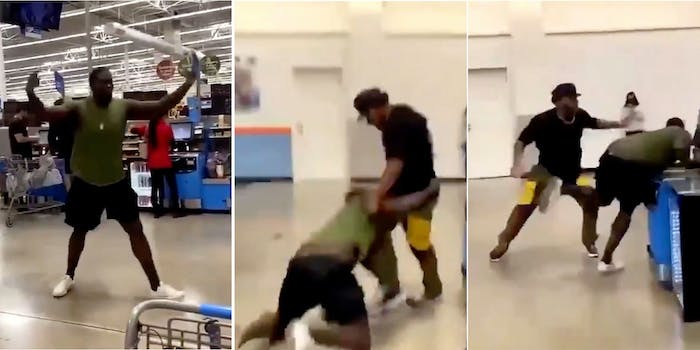 'Sucks for the real Bruce if he ever logs on social media.'

A viral video shared on Twitter yesterday afternoon featured a tall Black man, wrongly identified as former NFL player Bruce Campbell, getting into and losing a during a fight at a Walmart. NFL experts have since debunked the connection to the ex-Raiders lineman, though at least one site is still going with the false version of the story.

The viral video, originally shared by OnlyFans’ Kandy Kruz, got boosted by Twitter user Raider Albert (@TheFakeAlbert), who wrote, “BREAKING: ex #Raiders offensive tackle Bruce Campbell involved in altercation. Was taken to hospital with a broken jaw. Wow.” He added the hashtag #RaiderNation to make sure that fans of the team, now based in Las Vegas, saw it.

Pop culture website Outkick described Albert as “a troll account covering the Raiders on Twitter” who “posted a video of a rocked up dude getting his ass kicked in a Walmart.”

People clearly enjoyed the video, with Twitter user @ThaSmoothness captioning a screenshot of the man identified as Campbell getting thrown headfirst into a self-checkout counter with, “Beep, please put item in the bag.”

And, this being the internet, some saw the name Bruce Campbell and connected it to the Evil Dead star.

At least one person saw the opportunity to connect the beatdown to the Twisted Tea meme that helped close out 2020.

But as Ted Nguyen, an NFL writer for the Athletic, noted, “This is blowing up but that’s not really Bruce Campbell.”

Nguyen went on to tweet that the man in the video identified as Campbell has no tattoos, unlike the real Campbell, a 6-foot-7, 314-pound lineman who was drafted out of the University of Maryland by the then-Oakland Raiders in 2010. Campbell played for three different NFL teams between 2010 and 2014 before finishing his pro career in Canada with two CFL teams.

Yet TotalProSports.com interpreted Raider Albert’s tweet as true rather than tongue-in-cheek, “reporting” in a Sunday story that, “Just because you are big does not mean you can fight people smaller than you.”

The story continued, “Former Raiders offensive lineman Bruce Campbell found that out the hard way after he had to be taken to a local hospital with a broken jaw because of an altercation he had with another man,” and further embellishing, “It all went down inside a Walmart in front of hundreds of stunned people.”

“Crazy how fast this blew up,” Nguyen commented about the viral fight video, which passed 1 million views this morning. “Again, that’s not Bruce Campbell! Sucks for the real Bruce if he ever logs on social media.”