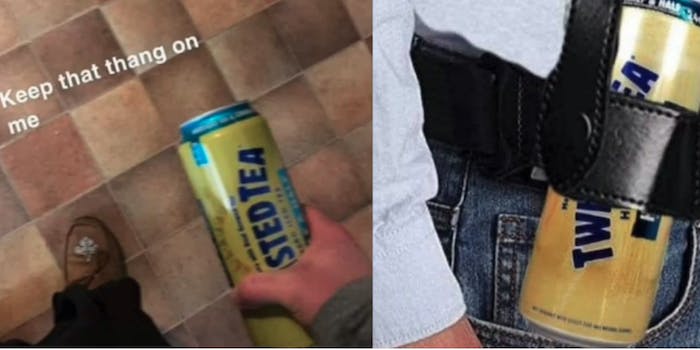 Twisted Tea memes: From a viral smackdown to part of the Meme Canon

Even Dave Matthews Band has been dragged into the Twisted Tea memes.

2020 was a terrible year, but at least we got a new meme in its closing moments, involving Twisted Tea. The hard ice tea beverage beacame a meme—thanks to a smack seen around the world.

The meme originated after an incident recorded at an Elyria, Ohio, convenience store, which went viral right before Christmas 2020. After enduring harassment and racial slurs from a drunk white guy, a Black man smashed a can of Twisted Tea across his face.

The possible identity of the man who took a can to the face (as well as several punches after that) was floated on Twitter, but the meme is more concerned with the can of Twisted Tea being utilized as a weapon. In this case, against a racist. But people found other timely ways to use it.

It really blew up on TikTok, emphasizing how essential movement is to the Twisted Tea meme.

The meme craze gave Twisted Tea the kind of promotion companies can’t buy. I mean, look at this piece of cinema.

And this fake Netflix poster.

And if that’s not quite your cup of Twisted Tea, here’s a reworking featuring an epic Phil Collins moment.

Someone even worked it into Home Alone 2: Lost in New York (though claiming it was “the best scene from Home Alone“).