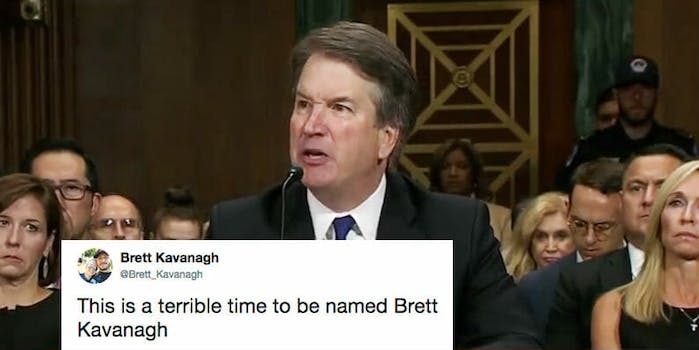 "You can't spell Kavanaugh without 'ugh.'"

Even though my own last name is a little funny, and the other Joseph Knoop is evidently a Pintrest “tastemaker” (yuck), at least I’ll never have this poor sap’s luck. A gent by the name of Brett Kavanagh shares everything but one letter with one Brett Kavanaugh. You know, the epitome of white male privilege and likely our next Supreme Court Justice.

This is a terrible time to be named Brett Kavanagh

The less famous Kavanagh identifies himself as a customer guide at Goodson Clothing & Supply Company, a corporate clothing company that sells uniforms to companies like Brookstone and Eddie Bauer. He’s also a Carolina Panthers fan.

Kavanagh hasn’t commented further on what we’re sure must be a deluge of tweets from riled up Twitter users, but he’s far from alone. Twitter users with names identical to other celebrities came forward to offer their condolences.

You had Will Smith, a popular VR developer who’s a regular on Giant Bomb.

There was Michael Bolton, but not the “When a Man Loves a Woman” one.

I feel your pain, brother.

A less famous version of the vice president showed up, too.

Welcome to the club, brother.

And even folks with perfectly unique or non-famous names offered their support in the form of some sage beer-related advice.

Maybe not the best time to profess your love of beer either pic.twitter.com/ShyVYAvLbC

And some glib observations to boot.

You can tell the bad one because he has an UGH in his name.

Of course, there’s little this Kavanagh can do to defeat the real Brett Kavanaugh. After a harrowing week of protests, stunted FBI investigations, and internet buffoonery, we’re likely getting Kavanaugh on the Supreme Court. You can pass the time until then by reading about how Trump’s presidential alert frightened the nation’s cat and dog population, or watch these bonkers ads from a Texas council candidate that look like they were shot on a 1990s camcorder.

Or, if you like beer (like both Kavanaugh and Kavanagh), feel free to partake in downing some cold brewskis. Especially if you’re celebrating and/or mourning about any kind of Supreme Court news.