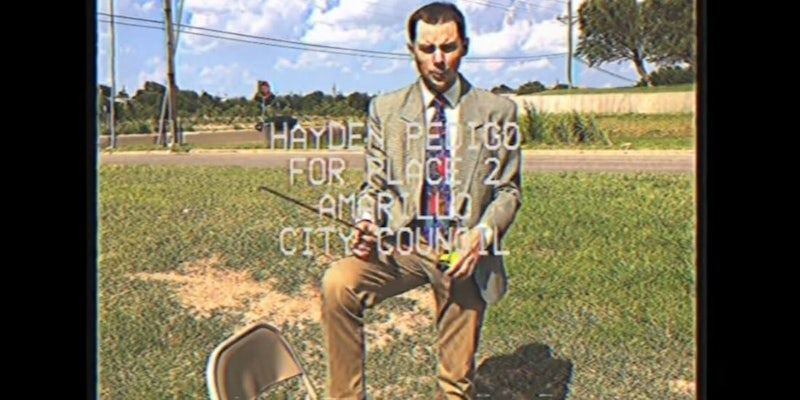 This potential Texas councilman has the most bonkers campaign ads

It’s like he’s being filmed with a camcorder circa 1991.

Hayden Pedigo is a man who appears to be straight out of the 1990s and who is running for a city council seat in Amarillo, Texas. His YouTube candidacy ads are straight up bonkers.

When he announced that he was running on Aug. 5, Pedigo introduced a campaign ad that looks like it was recorded on his father’s camcorder. What he’s doing in the video is bizarre, to say the least. He throws a chair across a drainage ditch. He tries to measure the width of the ditch. He tosses the chair off a tiny cliff. He measures the inside of his leg.

At the end of the video, he reintroduces himself as Hayden Pedigo and, with his right leg resting on a folding chair, says he’s running for place 2 on the Amarillo City Council because “I believe that a lot of local small business owners out here are straight up getting bonked.”

That video has received more than 42,000 page views on Pedigo’s YouTube channel—which, as of this writing, has 175 subscribers. YouTube commenters seem to love his stances and his style.

One commenter wrote, “What I love about this is that he doesn’t even state if he’s for against small business owners getting bonked. He’s just stating that it’s happening. Well, he’s got my vote, I like a politician with an air of mystery.”

Wrote another, “Finally, a politician who can help the little guys avoid getting bonked.”

And another, “Small business owner here. Sick of getting bonked. Amarillo, elect this man.”

Luckily, Pedigo has more campaign ads that are just as bananas as the first.

In yet another video, Pedigo says, “I may not know much, but I do know about Amarillo. Amarillo, we’re going to rebuild and we’re using bricks this time. We’re going to break the glass ceiling.”

Then, he throws a brick through a mirror before explaining, perhaps rather obviously, that the budget for that video was $0.

According to KFDA in Amarillo, Pedigo is a local musician and artist and he thinks he has a slim chance of actually winning the election.

“I was surprised I would get that much attention for a city council bid video that I made on a cell phone,” he told the TV station. “ … I wouldn’t call the video a parody of anything. It’s just an Amarillo video.”

And in Amarillo, as everyone knows, you can’t just bonk people and get away with it.