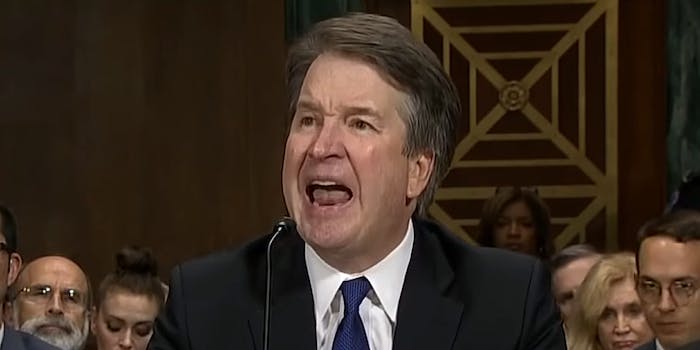 Kavanaugh being angry won the day.

As the Senate Judiciary Committee Hearing into the sexual assault allegations against Supreme Court nominee Brett Kavanaugh dragged on, it became clear that it was actually two separate hearings.

The first saw accuser Dr. Christine Blasey Ford lay bare her version of events, openly speaking about her fear at having to publicly speak about the attack, and becoming visibly choked up every time every time the alleged attack was mentioned.

The other was Judge Kavanaugh loudly and passionately making his case for why he didn’t and couldn’t have carried out the sexual assault against Dr. Ford.

What Brett Kavanaugh has done during this hearing:

– disrespect senators, ie asking them if they like to drink (seriously)

– proven he cannot be an impartial judge

A major subject of the hearing was Kavanaugh’s time in the wealthy, sexually active, booze-driven culture of 1980s D.C.

It seemed as if the entire culture of white male entitlement, particularly that of the nexus of East Coast private schools and the Ivy League, was on trial. That old school mentality actively clashed with the #MeToo movement that has seen women’s accusations believed and investigated, rather than brushed aside as they normal have been.

There was anger, yelling, interrupting of women, and a sense of not needing to answer difficult questions. In short, it was the essence of male entitlement.

Kavanaugh is white. A male. And privileged.
Being held accountable isn't supposed to happen to him.
That's why he's angry.
That's why he's crying.
He honestly can't fathom this loss of power.#KavanaughHearings

Judge Kavanaugh’s opening statement was an angry litany of references to parties, beach weeks, sports camps, expensive prep schools, and drinking. His vacillating between shouting conspiracy theories and tearful mentions of his family seemed to baffle hearing watchers and journalists—being described as everything from “unhinged” to “blistering.”

Kavanaugh clearly became agitated about Democrats asking questions related to his drinking. When asked by Minnesota’s Amy Klobuchar if he’d ever blacked out from drinking, Kavanaugh immediately asked Klobuchar if she had—with Klobuchar demanding Kavanaugh answer the question.

He did not and again asked Klobuchar if she’d ever blacked out from drinking, which she declined to answer.

Bizarre turn there: Sen. Amy Klobuchar asks if Kavanaugh ever "drank so much that you couldn't remember what happened, or part of what happened the night before?"

Kavanaugh turns it on her. "Have you," he said.

Kavanuagh also asked a somewhat baffled Sheldon Whitehouse if he’d ever played the drinking game quarters while being asked about references from his yearbook. Kavanaugh did seem to realize what he was doing didn’t look good, and later apologized to Klobuchar for the insinuation that she’s a blackout drunk.

The frat boy culture that Kavanaugh was steeped in was also on display with the constant interrupting of women by men. Committee Chairman Chuck Grassley kicked off the entire hearing by steamrolling over ranking member Senator Dianne Feinstein’s opening comments as she criticized Grassley for not introducing Ford.

He interrupted other Democratic senators and didn’t stop there. Grassley continuously interrupted Dr. Ford during emotional moments in her testimony, and interrupted Republican questioner Rachel Mitchell, to the point where he was being mocked for taking time away from the “female assistant” his own party hired.

"I don't know if it is fair for me to interrupt." Chuck Grassley, the man who is interrupting Dr. Ford IN THE MIDDLE of her testimony of sexual assault

They hired a woman to question Dr. Ford because the optics of all white men were so bad, but Grassley can't help himself.

He started off by interrupting Feinstein while she was questioning him, then yelled “no, no, no” as Democrat Patrick Leahy during a line of questions about the infamous high school yearbook, continuously interrupted Hawaii’s Maisie Hirono, and straight up told Senator Klobuchar “I don’t mean to interrupt—well, I guess I do,” then rolling right over her question.

"You're interviewing me!" Kavanaugh says to Sen. Feinstein. "You're doing it, senator. Sorry to interrupt, but you're doing it." pic.twitter.com/fQ64O6idQE

There was also tremendous anger on display, particularly in Kavanaugh’s “blistering” opening statement, where he attacked Senate Democrats for holding onto Dr. Ford’s letter and not acting on it until late in the nomination, and where he also went after the Clintons, the media, and the entire Judiciary committee in general for the delays in the process.

Which was what his supporters wanted. Many Kavanaugh defenders claimed his anger was appropriate for someone falsely accused of a sexual assault—with no less than President Donald Trump impressed by Kavanaugh’s fiery, defiant tone.

BREAKING: Trump is so far standing behind Kavanaugh’s nomination, I'm told. He thought Kavanaugh’s angry, emotional opening statement was strong. Within the White House, the consensus is that the Supreme Court nominee showed passion and honesty.

Turn to any conservative, and you’ll see that they loved that Kavanaugh came out swinging.

In Defense of Kavanaugh’s ‘Anger’ https://t.co/sIX8nC5zSt

Also getting in on the anger game was Republican Lindsey Graham, who practically foamed at the mouth as he raged against Senate Democrats, wagging his finger and decrying the process as a “sham” and “disgraceful.”

It too received praise.

Many women recognized in Kavanaugh’s emotional tableau the kind of ferocity they’ve seen that presages sexual assault. But instead of empathizing with women, men online cheered the behavior as apt and justified.

Kavanaugh's hearing was all about the truth. His truth and Mrs. Fords. I believe something terrible happened to her I just don't believe he did it. I'd be angry too If my life was destroyed by lies.

That Kavanaugh would come out fierce and smug, instead of contrite or apologetic, and that he would receive praise for it across conservative circles strikes at the core of the divisions the #MeToo era has brought up. Men are afraid that the behaviors—behaviors that damaged and othered women—they are accustomed to will be taken from them as a result of this societal shift.

They want to continue to stand at the top of society and act as they please without judgment, criticism, or consequences for their actions.

If this is one of their last stands, in Kavanaugh’s fiery speech to the Senate, they found an ally.