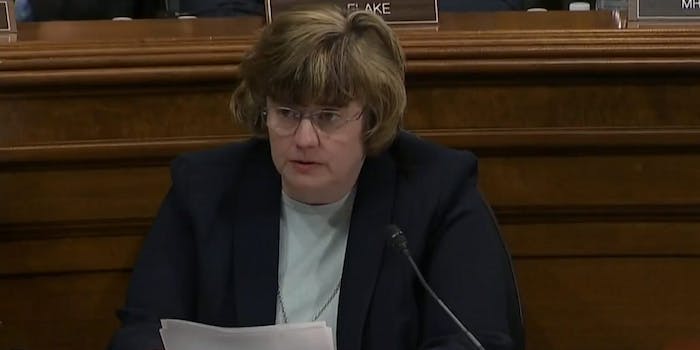 Rachel Mitchell criticized Dr. Ford’s testimony and was promptly shut down by Twitter

Mitchell's claims are troubling, to say the least.

On Sunday, Mitchell penned a memo to Republican senators that tore into Dr. Ford’s testimony, painting her accusations as unfit for a legal trial. Titled “Analysis of Dr. Christine Blasey Ford’s Allegations,” Mitchell implies Ford’s testimony is uncorroborated and unsubstantiated in the memo, which leaked to the press late Sunday evening.

“Dr. Ford identified other witnesses to the event, and those witnesses either refuted her allegations or failed to corroborate them,” Mitchell claims, according to NBC News producer Frank Thorp V. “For the reasons discussed below, I do not think that a reasonable prosecutor would bring this case based on the evidence before the Committee.”

The memo proceeds to nitpick Dr. Ford’s testimony in myriad ways.  In one case, Mitchell claims Dr. Ford does not consistently remember the event because she alleged the assault took place in the “mid 1980s,” then the “early ’80s,” and finally July 1, 1982. Mitchell also believes Dr. Ford’s testimony is “weak” because she doesn’t remember how she attended the July party, how she was invited, how she came home from the party, or where the house was located.

Memo from outside counsel Rachel Mitchell to GOP Sens obtained by @NBCNews: “I do not think that a reasonable prosecutor would bring this case base on the evidence before the committee” pic.twitter.com/W0JHOTOVS6

It doesn’t take long to realize Mitchell’s memo has glaring issues. For one, there’s her sheer insensitivity to Dr. Ford as an alleged victim. Yale University associate professor Joan Cook notes that human memory is “much more fluid and dynamic than we once thought it to be” and that time, life experiences, or intervention can change how memories are stored and retrieved, even traumatic ones, Cook writes for The Hill. She also notes that memory is stored in pieces, not one continuous stream. This would explain why Dr. Ford does not know how she attended the party or where the alleged incident happened, even though she’s confident that Kavanaugh sexually assaulted her in 1982.

Significant portions of Mitchell’s memo draw immediate conclusions about Dr. Ford’s testimony without further evidence. For example, Mitchell claims that Dr. Ford’s witnesses “refuted” her allegations, but Dr. Ford’s claims have not been refuted by a single witness, even if they haven’t been fully corroborated. Most importantly of all, Mitchell’s conclusions seem to echo conservative talking points criticizing Ford’s testimony, suggesting that Mitchell is playing to the Republican base’s skepticism against Dr. Ford’s claims.

Twitter quickly responded by condemning the memo, with some fearing that Republicans leaked its contents in order to use Mitchell to discredit Dr. Ford in the public eye.

“Obtained” by NBC. Who could have possibly wanted a partisan assessment dressed up as a “memo” from “outside counsel” in the news? https://t.co/5ad7kLj5mP

Grassley told us that a "female assistant" was hired "to ask these questions in a respectful way," yet she's on record during the hearing effectively saying that the forum was not ideal for its intended purpose. It sure seems now that they and she had a different purpose.

So the prosecutor brought in to attack Dr. Ford says there is no evidence.. OK https://t.co/UT3Xr7B9LN

Surprise! There is a reason Rachel Mitchell ‘s office has such a lousy record in rape cases, domestic violence cases, and child abuse cases! https://t.co/h5AO7C9gu7

Others believe that Mitchell’s memo makes zero sense from a prosecutor’s perspective. An FBI investigation is still underway, so why would she conclude that Dr. Ford’s case cannot be prosecuted?

A reasonable prosecutor would not make this statement with a limited exposure to the evidence, and a complete lack of an investigation. You demean your position by writing this before an investigation takes place. https://t.co/vbF9CtCS4K

What ethical investigator wouls present an opinion in a case where only the victim was interviewed, the accused was not, and no other witnesses including the other participant were questionned? Shady as hell to respond in thay situation.

If Rachel Mitchell is in the habit of making judgments like this without proper victim interviews or investigations, my guess is @azcentral has some work to do. https://t.co/RE2FnoOmR1

It's almost like Rachel Mitchell took this unethical position to advance partisan goals because she is an unethical partisan hack.

No matter what Mitchell thinks, many agree that Kavanaugh’s behavior during the hearings was so volatile and disrespectful that his actions alone proved Dr. Ford’s testimony was true.

Not included in the memo from Rachel Mitchell: Any analysis of Judge Kavanaugh’s testimony at Thursday’s hearing.

That doesn't matter. The way he wigged out at the hearing was enough to disqualify him https://t.co/SZhzD1dWTM