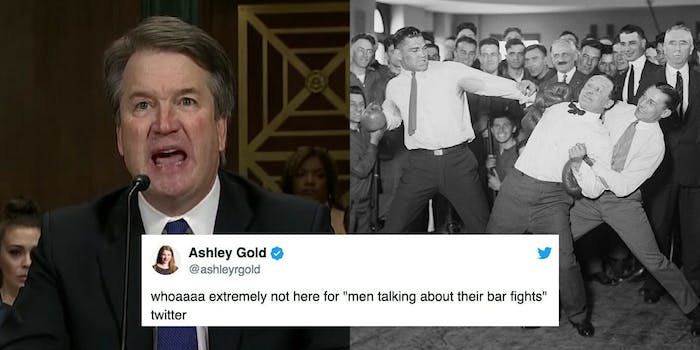 So some violent, non-communicative men walk into a bar...

So what if Judge Brett Kavanaugh got into a fight with a guy who he thought was the lead singer of UB40 but wasn’t actually the lead singer of UB40, hmm? What of it! After Kavauangh’s rap sheet development—following his vocal appreciation of beer—men across Twitter started sharing their own bar fight stories.

“I don’t know one guy, including myself, who wasn’t in a bar fight,” Newsmax host John Cardillo tweeted. “Not a single one.”

I've been in two bar fights, though I suppose one was technically a "Jumbo Slice fight." (In neither was I anywhere close to blackout drunk.)

Ive been in dozens of bar fights (ask the guys I grew up with) nearly lost an eye in one and that's just one of the injuries (I have the scarred stitch marks to prove the rest) never been black out drunk but I have had to defend myself, which I am still perfectly capable of doing https://t.co/VQSotGWW5g

I don’t know one guy, including myself, who wasn’t in a bar fight.

Not a single one.

On one hand, these admissions seem to signal that, even if Kavanaugh did get into a bar fight by throwing ice into the face of a man whose identity he mistook, as police reports indicate he did, that was A-OK behavior. Kavanaugh did the warm, red-blooded American thing and defended his dignity against a man he had absolutely no business attempting to fight. It’s manly! It’s tough! It’s brave and strong and all the other descriptors of the stereotypically testosterone-pumping American male! And because I did it, I too am a good man! Listen as I toot my own horn proudly!

In other words, these men are saying it’s OK that Kavanaugh did this, because they themselves did this, and therefore no one should be shamed for being an angry, violent man.

Which is why it’s actually quite gross that men are sharing their own bar fight stories. It’s a mad attempt to display honorably male qualities—as if the world should be impressed by someone’s physical domination over another person. Men who participate in bar fights think their participation is something to be honored, or that it makes them more valuable than men who do not.

It would be ignorant to say something along the lines of, “Real men don’t get into a bar fight,” because that’s just as restrictive of a standard of masculinity, and it completely ignores the reality that these men, just as Kavanaugh, do fight each other at bars. However, it’s this normalization of communicating in violence, and the desperate grab at congratulations, that make these tweets so awful. Those are the normalcies that these tweets are trying to reinforce.

A lot of other men, bar fight-veterans or not, probably see this exhibition of physical strength as a high standard of masculinity, too. But we shouldn’t give out cookies to people for having physically fought someone while inebriated.

Across Twitter, several people shot back at these dumb, macho tweets by questioning the people who shared them. Many people expressed that, no, they are not here for “bar fight Twitter,” and that these posters should probably check themselves on why they’re so eager to share tales of their drunken depravity.

White guy Twitter talking about all the lame bar fights they’ve been in after a white guy is called out for getting in a bar fight with someone cuz they looked like the lead singer of UB40 is maybe the whitest white guy thing of all time?

Imagine thinking that getting into bar fights is just a thing everyone does. https://t.co/HZKq4kfQee

Weird how many guys here are flexing about getting into bar fights but also making sure they deny blacking out.

I want to make it very clear to all the men out there who are not Brett Kavanaugh: nobody is interested in *your* drunken bar fights. I know this is confusing. Please feel free to share them when someone nominates you to the Supreme Court.

Love to see all these old dudes on Twitter talking about how many bar fights they’ve been in while somehow still maintaining that masculinity isn’t toxic.

Of course, many others couldn’t help but poke fun at the men who genuinely felt that anyone on the internet wanted to read a word of their own bar fight experiences. Several people published memes imitating these same stories, writing that they get into hundreds of bar fights each year, and are even participating in a bar fight as they tweet this.

I’ve been in 1000s of bar fights (I’m in one right now), and a guy just smashed a beer mug against my cranium. I would pass out but I want to get in another bar fight (it’s only 11:24AM, plenty of time left in the day for several more bar fights) pic.twitter.com/fcMQdddlcm

I’ve been in at least 5 bar fights a month since I was 12, and if you think that means I like to drink or am an asshole then screw you.

I was once in a barre fight it was en pointe lemme tell you.

I was in one long, extended saloon brawl from the ages of 13-24. Buck the piano player broke a bottle of sarsaparilla over my noggin on my 18th birthday. also I was 100% SOBER when all this happened

I have been in hundreds of bar fights.

OK, there wasn't any actual fighting, I just ate the candy bars and then got mad at myself for eating them.

And then I'd eat more candy bars.

I have a problem.

i've been in hundreds of thousands of bar fights on no fewer than 10 continents (got the passport stamps 2 prove) over the past 20 years and i was stone cold sober in every one i will fight every person on this webiste beer-free https://t.co/LZJcuDPjpE

Yeah I get into bar fights

I've been in millions of bar fights. Endless bar fights. I wake up getting my skull smashed in with a beer bottle and go to bed with an improvised Molotov cocktail exploding in my face. I'm literally in a bar fight right now, typing this

However, no one has summarized how over the internet was on tweeted bar fights quite like Darth, who says he has never stepped foot in a bar to begin with.

Maybe all these angry, bar-fighting men should switch to water next time they step foot in a bar.