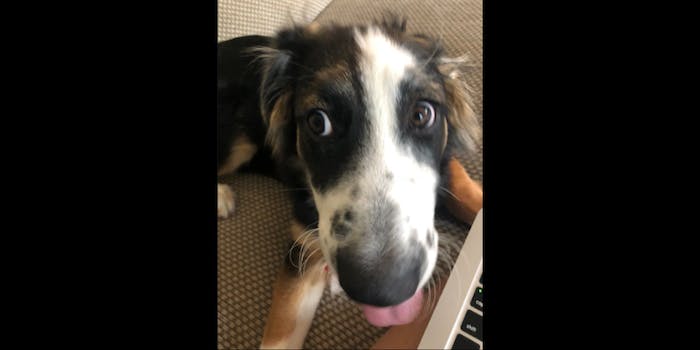 Dogs and cats had terrified reactions to the push alert.

Trump’s first presidential alert was blasted to American phones across the country starting at 2:18pm ET on Wednesday. It made a sound similar to that of an Amber alert, screeching through speakers and startling people, and their animals, over a 30-minute period.

The reaction to the message, which read “Presidential Alert: THIS IS A TEST of the National Wireless Emergency Alert System. No action is needed,” was swift. #PresidentialAlert was trending on Twitter in minutes, and people started sharing their reactions, and those of their pets, to the alert.

DEAR PRESIDENTIAL ALERT YOU SCARED MY PUPPY ON BEHALF OF DAISY I DEMAND AN APOLOGY LOOK AT HER pic.twitter.com/eLrgyDNju4

People shared stories, and in many cases photos, of their terrified pets, reacting to the sound emanating from phone speakers. One photo shows an obviously spooked dog named Daisy, who’s owner demanded an apology.

@MelikaNoKaOi tweeted that every dog in her neighborhood started barking during the alert, and @EllenBookstore tweeted that their dog “started running back & forth between the 2 phones wondering what was happening. Finally he decided maybe it meant he should answer the door! Bark! Bark!”

#PresidentialAlert Both our phones went off with the alert tone. My dog started running back & forth between the 2 phones wondering what was happening. Finally he decided maybe it meant he should answer the door! Bark! Bark! Lotta help he'll be in an emergency!

Some users shared photos of their animal’s faces in the moments after the alert startled them, while others shared stories of reactions with a photo of the alert itself.

Cats weren’t fond of the alert either. Twitter users shared photos of angry, confused, or scared kitties reacting to the loud sounds.

Grayson, our #bandkitty wasn't such a fan of the #presidentialalert today. A little too scary. pic.twitter.com/LYCrQWH6Zj

My cat still hasn’t recovered from the presidential alert. pic.twitter.com/LFoFIHDpOs

The best part is I'm just by myself with my cats and new dog with this beeping annoying them it's ok it's just a test I guess #PresidentialAlert pic.twitter.com/kz1UibZicu

@AngelaMDiLoreto tweeted that it took some time to calm her dog after the alert, but that she understood the need for it because “I have zero traditional media near me right now.”

Just got my dog calmed down from the #PresidentialAlert but understand the need for these via cell phone as I have zero traditional media near me right now pic.twitter.com/ZsxaNpGL64

We have not yet heard when the next test will happen, but a 2015 law states that a test must happen at least once every three years, according to Inverse. That means we can expect to see—and hear—one again after the 2020 election. Maybe next time pet owners will be more prepared for the effect it will have on their fur-babies.