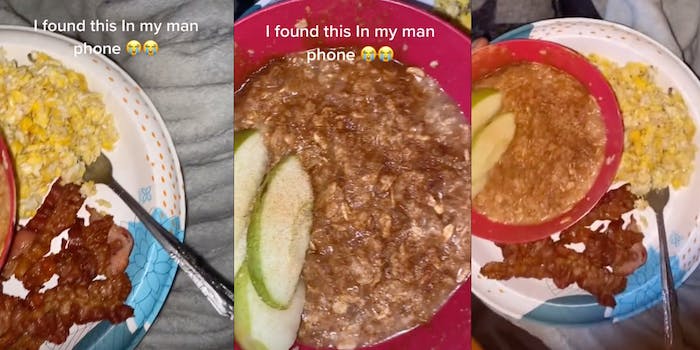 ‘The day I see this would be the last day I ever cook for him’: TikToker finds video of her boyfriend roasting her cooking

'At least she tried.'

A TikToker’s ungrateful boyfriend is getting playfully dragged after she shared a video he recorded dissing her cooking ability.

The extremely brief clip quickly collected views and likes after being uploaded, and within days had become the most popular on TikToker @chikitarosee’s page. Within two days of being posted, the video had earned more than 1 million views, along with countless comments defending @chikitarosee, who goes by Jakia Rose on her page.

The video, which she seems to have uploaded in its entirety, is shot from the perspective of Rose’s boyfriend. Moments after receiving a home-cooked meal from his doting girlfriend, this man has the audacity to record a critical video, roasting her attempt at homemaking.

“This look like shit,” her man says in the background. The camera is pointed down, toward a simple and well-rounded breakfast. Arranged on a paper plate, Rose has prepared crispy bacon, scrambled eggs, and, as she confirmed in the comments, apple cinnamon oatmeal. She even added a flourish of cinnamon and sliced apples to enhance the flavor. Despite this, her boyfriend, humor ringing in his voice, continues to jokingly claim that the food “looks like shit” as he zooms in on different parts of the meal.

At least he has the decency to note that “at least she tried,” before the video ends. In the video’s caption, Rose excused herself for a quick “crying” sesh, though she, too, seemed to find humor in the video. She clarified in a followup video that she was standing right next to her boyfriend when he recorded it.

“He sent the video right in front of me,” she explained in the followup. “I was standing in front of him waiting for him to try my food, and that’s what he did.”

Despite a slew of offended comments calling him “ungrateful” and dragging him for the blatant “disrespect,” Rose seems amused by the entire situation. That didn’t stop her from engaging with commenters, however, as they contemplated “the way he would starve” if one of their boyfriends attempted anything similar.

“Girl the day I see this would be the last day I EVER cook for him,” one commenter joked. “Ion care if we married for 20 years. No more food for you ever sir.”

A few detractors commented on the “sewage soup with apples,” but the vast majority of commenters felt the meal actually looked pretty good. In response to one query, Rose noted that this was her first—and likely last—attempt at oatmeal.

Thankfully, Rose is finding humor in the situation. Her man may not be getting oatmeal anytime soon, but she hasn’t sworn off cooking for him entirely—yet.

The Daily Dot reached out to Rose.