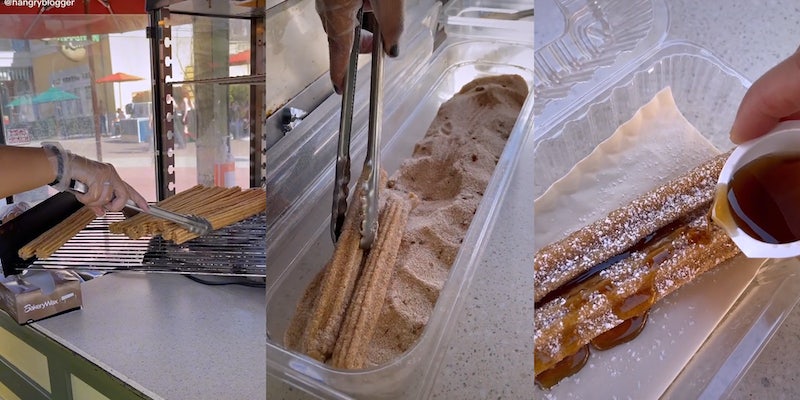 ‘Disneyland actually brainwashes you’: TikToker shares wild theory about how Disneyland gets you to buy churros

'Have you ever walked by a building with a bunch of speakers on it, but no sound is coming out?'

A TikTok food blogger has gone viral with a video claiming that “Disneyland actually brainwashes you every time you visit,” using an unconventional technology to get its theme park visitors to buy food.

The video comes courtesy of @hangryblogger, and it’s racked up more than 5.2 million views in just three days.

In the video, the creator has a conversation about the food at Disneyland, which opens up with the line, “Disneyland actually brainwashes you every time you visit,” which leads the companion to respond with an incredulous, “What?”

“So, everyone loves Disneyland, right?” the creator asks.

“It’s the Happiest Place on Earth,” he observes, using the theme park’s famous tagline. He then shifts to asking, “But have you ever walked by a building with a bunch of speakers on it, but no sound is coming out?”

The companion responds, “Yeah, what is that?”

“So that’s what Disneyland calls smellotizers,” the creator offers, “and what they do is they shoot out a certain smell.”

At that point, the 15-second video cuts out.

Though short and dubious in its premise, TikTok fans appeared delighted with the video, judging from the comments.

One respondent noted, “I want to be brainwashed by Disneyland.”

Another observed, “They don’t have to brainwash me. I just get a churro anyway because it’s my favorite Earth treat.”

One person, accepting the premise of smellotizers, brought up pandemic protocols, wondering how that would work when everyone’s wearing masks now.

Not everyone expressed enthusiasm about the Happiest Place on Earth, though. A few people groused about Disneyland being overpriced and overrated, while one person confessed to never having gone to the theme park. That person asked, “Why is everyone so hyped up about it?”

The creator jumped into the comments to simply respond, “It’s the Happiest Place on Earth.”

The Daily Dot has reached out to Disneyland for comment.