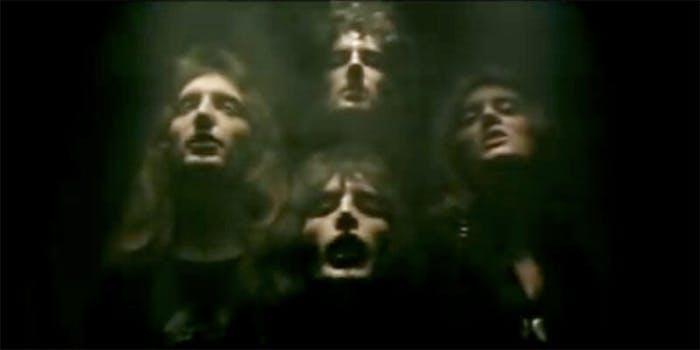 Almost four months in the making.

The already highly anticipated upcoming film Bohemian Rhapsody about the life of Freddy Mercury starring Rami Malek may have just gotten an added viral boost in the strangest of places.

First off, it goes without saying that Twitter gets a bad rap a lot of the time, and rightly so. There are literal Nazis running rampant. Russian bots, trolls, misogynists, and heck, even our own president uses the platform to bully and incite potentially harmful international relations and the website won’t do a damn thing about it.

But sometimes, Twitter can be used for pure, unadulterated good. This is one of those instances.

On May 7, 2018, user @CostcoRiceBag (Hadie Mart) tweeted completely innocuously, “Blows my mind that school used to go into JUNE and somehow I tolorated it [sic].”

Just a student making an observational remark. Nothing to see here, right?

Well fast forward to Aug. 23, and that same user tweeted the following:

IS IT JUST ME, OR DID I JUST PULL OFF THE GREATEST TWITTER SCHEME OF ALL TIME?????

Read the first word of my tweets to find out….

The next handful of her tweets read as follows:

Real talk: idk what I’m going to do when my friends no longer all live within a 1 mile radius of me

IS THERE A MORE ACCURATE REPRESENTATION OF ME??? https://t.co/Jk6tcrcTDi

In case you weren’t keeping track, the first word of each of those tweets read: “Is this the real life? Is this just fantasy?”—as in, the first lyric to Queen’s iconic hit song, “Bohemian Rhapsody.” For four months, starting with the “blows my mind” tweet, @CostcoRiceBag had been slowly, painstakingly tweeting the words to the song backward.

To fully appreciate how great of an endeavor this was, know that there are a whopping 374 words in the nearly six-minute song.

Suffice to say, her persistence paid off, because in the two days since her big reveal, her final tweet in the scheme has gone mega-viral—liked more than 300,000 times and retweeted more than 136,000. Just as it should be.

Here are just a handful of the reactions of those in awe of the feat:

This girl tweeted the entire lyrics of Queen's 'Bohemian Rhapsody' over the course of like 4 months.

That's some dedication right there.

Okay, distraction from politics for one moment.

As a lover of words, I have to give respect to what she just pulled off. https://t.co/kLFPkkLfhI

This is an unbelievable achievement. I clicked thinking it wouldn't be worth it.

This isn’t the first time someone has pulled a long con joke on Twitter, but it certainly is the most impressive. Kudos all around.