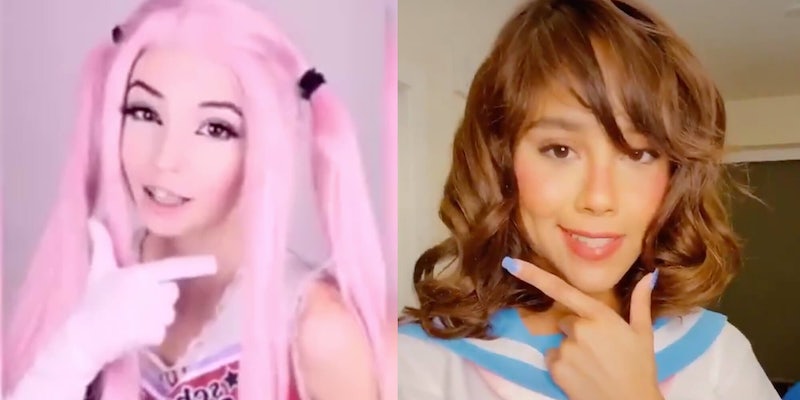 Who wore it better? Belle Delphine vs. Neekolul

The TikTok stars trend on Twitter as fans debate their dance moves.

It’s not an uncommon occurrence for the 20-year-old internet personality. Over the years, plenty of odd moments have turned into viral opportunities for the Instagram model and TikTok star. Now she is trending again, this time not due to anything she did, but rather something she inspired. After Neekolul—a fresh-faced TikTok user gaining popularity—mimicked a TikTok video popularized by Delphine, comparisons between the two overtook Twitter Tuesday morning.

It all started with an upload from Delphine. In her unique, recognizable style, the woman widely cited as the influence for the popular “e-girl” style sang and danced along to “Mia Khalifa” by iLoveFriday. (The original dance is widely credited to TikTokker @nyannyancosplay.)

Delphine’s brilliant pink hair and coy personality quickly made the video a hit, and soon dozens of e-girls were cropping up all over the web, attempting the video for themselves.

The majority of subsequent TikTok’s mimicked the original dance, as well as it’s general aesthetic. For the most part, they paled in comparison to Delphine’s. A recent attempt from rising TikTok star Neekolul, however, caught the internet’s attention.

The video from 22-year-old Neekolul is very similar to those that came before it. It features Neekolul, outfitted in the girlish attire favored by e-girls, miming the original dance almost precisely. According to some people on the web, Neekolul did it far better. “She is literally the new Belle Delphine,” one person wrote. “Everyone bow down.”

Unsurprisingly, plenty of Delphine’s loyal fans came to her defense. “This is getting out of hand,” one person wrote. “Belle Delphine please come back and reclaim your throne.”

While the two e-girls’ fans were busy duking it out over who wore it better, the rest of the web shared its disdain for the trending topic. “Mfs fighting about whether Belle Delphine or Neeko is better,” one user wrote. “Like bro, they’re both terrible, let’s forget about em now.”

More than anything, as Delphine’s name rose to the trending list on Twitter, people were confused. They shared messages communicating their bafflement—nevermind who wore it better.