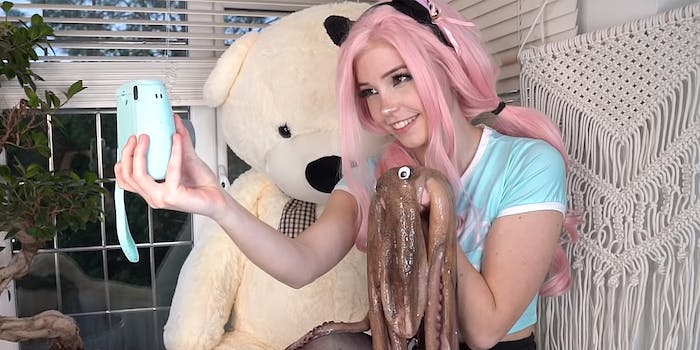 Her fans are bitter about a recent prank.

After the prank, fans threatened to “torpedo her career.” The threat apparently manifested with the organized mass reporting of her account for nudity and pornography, according to claims from multiple redditors.

Several users participating in the revenge campaign posted screenshots showing notifications from Instagram that said @belle.delphine had been removed for violating the site’s rules.

I just deleted an account that had 4.5 million fans I’m gonna get a lot of hate rip me

A spokesperson for Instagram confirmed to the Daily Dot that Delphine’s account was removed for violating community guidelines. Instagram maintains that multiple reports of an account only lead to the account’s removal if it does actually violate guidelines.

Delphine’s other social media accounts are still active, and she has not commented on the Instagram page takedown. On Friday afternoon, she was tweeting a mysterious countdown on her Twitter account.

Naturally, people have a lot of opinions. Some seem rather upset about her Instagram removal.

Other people are angry on her behalf.

People really fucking ran a campaign to get Belle Delphine's Instagram deleted, and it worked. Fucking incels are just jealous this girl can make a career out of her body. Cuz that is her job, you know, and a bunch of incel 15yo just messed that up.

What is with yall and belle delphine?? Like why tf would you get her accounted deleted for doing what every other insta model is doing??? Shes not a thot or a fucking slut. She did that shit for fun and there were followers who looked up to her. Smh

And some are utterly delighted.

Belle Delphine’s IG was deleted… another victory for mankind

Many are just out for the drama and entertainment.

Listen, i didn't want to do this, but in the wake of Belle Delphine being deleted, I'm going to step up and become the next ethot queen

But as Twitter user @VariaJStrix points out, the mass reporting campaign presents a gross double standard.

In other words, her body was weaponized against her only because it wasn’t used how fans wanted. And that kind of toxic targeted action should worry everyone.