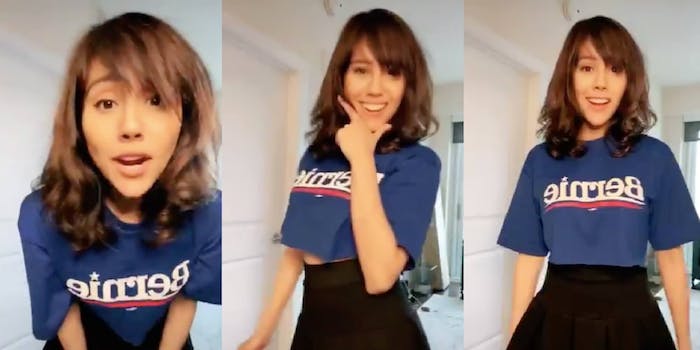 It’s a funny catch-22, if you think about it. As much as Generation Z loves, loves, loves to dunk on baby boomers—those climate-ruining, economy-tanking scoundrels—their appointed king, Sen. Bernie Sanders, skews at the older end of the boomer ranks. And fine, maybe Bernie is one of the few good ones, but the irony is definitely not missing when it comes to a new “Oki Doki Boomer” TikTok meme taking the internet by storm.

Earlier this week, TikTok user Neekolul went viral for a video in which she lip-syncs a boomer-taunting song of the same name, which is in itself playing off of the popular OK boomer meme.

“Like to trigger the BOOMERS,” she captioned the video, adding the hashtag #Bernie2020. She also uploaded the video to Twitter, where it’s been viewed over six million times (at the time of this writing) in less than four days!

The catchy little ditty in the clip originated from YouTuber Senzawa, who first tweeted the phrase in November of 2019 and then posted the accompanying video the following month.

Before long, the song became an inspiration to Generation Z on TikTok, typically as a way to blithely shut down criticism about fashion or lifestyle choices. Currently, there are over 1,700 videos on TikTok under the tag “okie dokie boomer.”

But despite this—and even taking into consideration that the orignal “Oki Doki Boomer” video has been viewed over 1.8 million times since December 14—Neekolul can probably take the credit for the song’s sudden meteoric rise into mainstream virality.

Unfortunately, the timing was not exactly ideal, as Neekolul uploaded the video one day before the Super Tuesday primaries. Bernie Sanders was projected to clean up to become the Democratic frontrunner, yet came in a close second in behind rival Joe Biden.

As a result, many are (perhaps unfairly) blaming the frivolity of her Oki Doki Boomer video on Bernie’s loss.