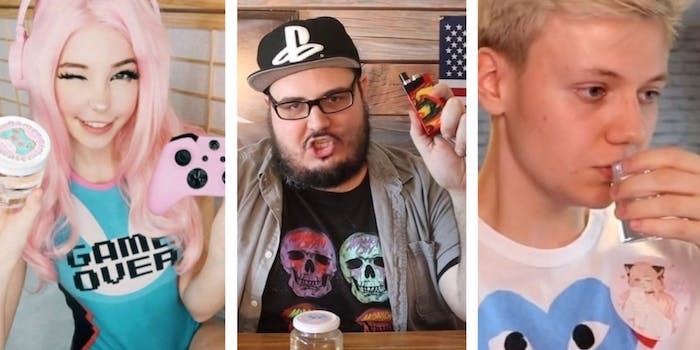 This can't be healthy.

Belle Delphine made waves all across the internet last week when she announced she would sell her used bathwater for $30 a pop to her extremely thirsty fanbase.

Now, some YouTubers are capitalizing on Delphine’s name (and her stunt) to land views of their own. And at least one vlogger got creative with his purchase.

“I am now selling my BATH WATER for all you THIRSTY gamer boys,” she wrote on her account, which is followed by more 4.1 million people.

As Delphine explained originally, she said the bathwater was not for drinking and only for “sentimental purposes.” So, Vito decided to vape it.

At first, he claimed he despised the experience. Then, he went on a trippy adventure.

Other YouTubers are also finding success with using Delphine’s bathwater to get themselves paid. YouTuber Pyrocynical, who has 3.3 million subscribers, procured a jar of the liquid and spent 10 minutes trying to muster up the courage to drink it.

A YouTube comedian named Yoel Rekts claimed to have bought three jars and showed himself drinking one. He also said he would give the second jar to the sad sack who leaves the most pathetic comment on his YouTube channel and he would sell the third one for $300.

In all likelihood, most of this content is exaggerated or faked. At the end of his video, Vito showed how he created his own jar of “Belle Delphine bathwater” without having to spend $30. Then, he insulted the people who actually believed in the concept of his video. Maybe none of these YouTubers bought it.

But apparently some people are.

As she wrote, “So my bath water SOLD OUT wtf…. i will be making some more soon but its been honestly a weird couple of days taking SO many baths LMAO i didnt expect this many people to be so interested, but if you wanted one…they will be back soon!”

This entire storyline is probably bogus or, at the very least, a joke. The YouTubers know this and some are openly derisive of those who would believe the bathwater to be real or to legitimately want to own it. But they also have no problem using Belle Delphine’s clout for their own gain.

After all, those who watched Pyrocynical’s video, which rang up more than 2.1 million views in two days, had to watch five ads to get through his 10-minute vlog. Vito’s video accumulated 50,000 page views in a day.

The bathwater might be fake. But the money made off her name is quite real.