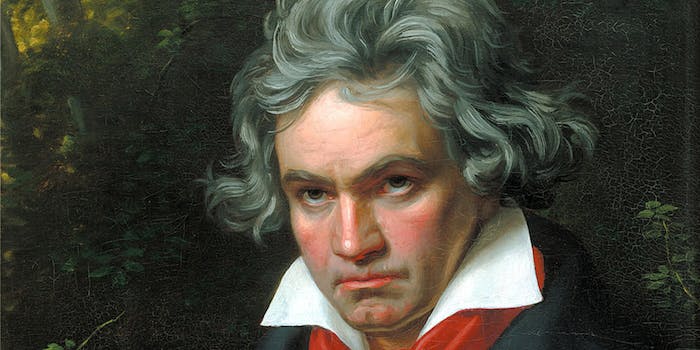 People are just now finding out Beethoven may have been Black

Did history whitewash the great composer? 'Beethoven was Black' memes are all the rage after a theory about his race resurfaced.

Composer Ludwig van Beethoven’s race has long been a topic of speculation given reports of his “dark complexion.” Many just found out on Thursday that Beethoven may have been Black, leading Twitter to erupt with memes.

“I was today years old when I found out that Beethoven was black,” Denzel Dion wrote in a tweet that many users related to.

Some have said Beethoven’s music reveals some understanding of rhythmic patterns common to African music, and his alleged Spanish Moor ancestry points to African blood. However, historians typically disregard these claims as rumors, since there is no record of anyone referring to Beethoven as “Moorish” or African.

Regardless, People online have come in hot with memes expressing what Beethoven being Black would mean to them.

A majority of them reference rumors that he used white powder makeup to mask the color of his skin.

“Beethoven getting ready for his concerts like,” Twitter user @thekillakay_ wrote, attaching an image of a Black man wearing white face makeup.

Many users posted the same meme to make jokes about how Beethoven “was walking around.”

“Beethoven in the concert hall dressing room,” Twitter user @DoctorBasedlove wrote, along with the meme.

Other memes include Thanos from the Avengers franchise and even the late Kobe Bryant, who actually learned how to play Beethoven’s “Moonlight Sonata” on the piano.

Many users are just very, very excited at the possibility Beethoven was Black.

“Beethoven was black?? Lmfao y’all aint gonna hear the last of this from me,” Twitter user @howtopless wrote.

“Yea i’m not fact checking whether or not beethoven was black imma just believe it,” Twitter user @supahotfire86 wrote.

Dr. Kira Thurman, who is a scholar writing about Black musicians in Europe, created a thread to breakdown her take on the “Was Beethoven Black” question. Thurman noted that the question has been around since the ’30s, and she doesn’t have a definitive answer to it yet. Thurman then pivoted the conversation to the “many Black European composers whose music deserves our ears,” such as Joseph Boulogne, Chevalier de Saint-Georges; Samuel Coleridge-Taylor; and Edmond Dédé.

“So instead of asking the question, ‘Was Beethoven Black?’ ask ‘Why don’t I know anything about George Bridgetower?’ I, frankly, don’t need any more debates about Beethoven’s blackness. But I do need people to play the music of Bridgetower. And others like him,” Thurman wrote.