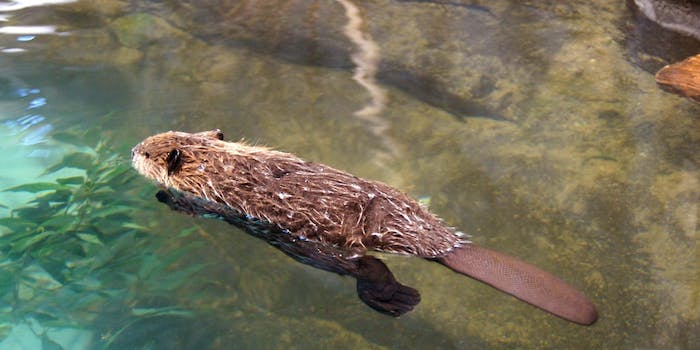 People are roasting this underwater beaver photo that took 4 years

Anticlimactic might be a gentle way of putting it.

All of us have a different calling in life, and labors of love are often highly subjective. That’s the only way we can explain this story of an underwater photo of a beaver that took a painstaking four years in the making.

French photographer Louis-Marie Preau would reportedly “lie still as a log” in a riverbed every night, equipped with weights and a snorkel, to capture a Eurasian beaver carrying a branch underwater. The species was hunted nearly to extinction by trappers in the 19th century—but thanks to conservation efforts, France is now home to some 14,000 of the beavers.

Eventually, Preau’s steadfastness paid off and he did not, in fact, throw away his shot.

Preau’s efforts were covered by the environmental news website Treehugger, and his prized photo quickly went viral in the tweet accompanying the story. Unfortunately, he probably didn’t get exactly the reception he was hoping for as Twitter jokesters ran wild with his beaver photo.

“We’ve all wasted four years at some point,” wrote one Twitter user. “Kinda a waste of time tbh,” added another. “Why didn’t I go into beaver photography?” quipped Teen Vogue editor Lucy Diavolo. “Four years strapped to the bottom of a lake sounds like a dream come true.”

Others were perhaps even less kind!

Other users roasted the beaver photo with the Robert Pattinson in a tracksuit meme.

Yet another user made a joke about the poor New York Times reporter who got scooped by Donald Trump Jr. in 2017.

Hey, you know what? It’s a perfectly fine photo of a beaver. If the internet thinks it’s such hot shit, we’d like to see it come up with a better underwater beaver photo. Until then, consider Preau’s work the bar.