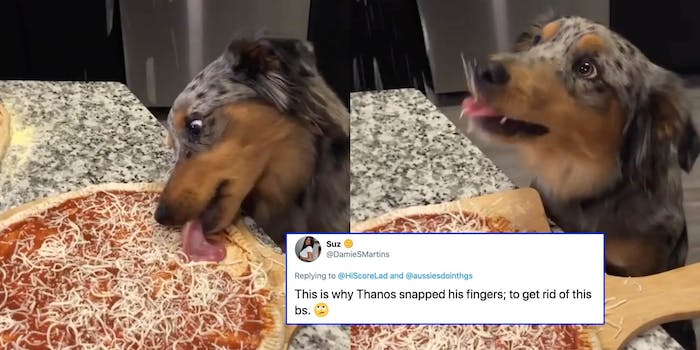 They still ate it afterward.

If you’ve ever had a dog, you know how impossible it is to resist when they want table scraps as a little treat. Those big eyes, the politely restrained whining… who wouldn’t give them at least one tasty morsel from your plate?

But there’s a stark difference between giving your persistent pup a bite of people food and letting him lick it up from your own plate while you’re mid-eating—or cooking.

A video showing an Instagram famous Miniature Australian Shepherd slurping down ingredients from a pizza that his person is in the middle of making has people online freaking out over the utter grossness of it all.

The imagery drew visceral reactions from folks online, many of whom were genuinely horrified by the idea that some people really just let their dogs chow down on food they’re eventually going to put in their own mouths.

“Dogs mouths are not as clean as humans!!” tweeted @ChrisHarte7, dispelling a misconception too many people still seem to have.

Some traumatized viewers held onto hope that the pizza was… just for the dog and not eaten by people?

Unfortunately, that was not the case.

“This was for my boyfriend and I to eat only,” the human running the Instagram said, before explicitly confirming all our worst fears that, yeah, they actually ate that pizza after the dog slobbered all over it.

Unfortunately for everyone, others had similar stories of times they had witnessed friends and family let their dogs get away with this deeply unsanitary behavior.

“I had a friend in HS…who had his dog sit in between his legs while he ate to ‘catch the crumbs,’” wrote @TooTall_McCall. “Occasionally the dog would get impatient and reach up to take a bite or lick of whatever he was eating. Half the time the guy didn’t notice.”

Fortunately, most of Moose’s Instagrams are just pictures of him being super adorable, and not doing things that will make us think twice about eating food prepared by friends with dogs.

But it’s sure going to be difficult to eat pizza without thinking of dog mouths that have licked dog butts and sometimes lick human pizza for a good while. Gross.