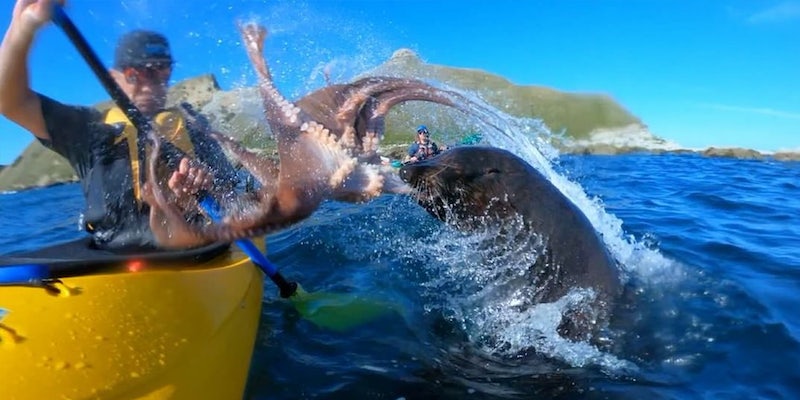 Watch this guy get slapped by a seal brandishing an octopus

Imagine this: You’re kayaking somewhere off the coast of Kaikoura, New Zealand, just minding your own business, hanging out with your friends. And then, suddenly, a seal appears out of nowhere, slaps you in the face with an octopus, and then disappears back into the water.

Like, right in the face, rude as can be. How insensitive!

That’s exactly what happened to Kyle Mulinder, whose buddy Taiyo Masuda captured the moment on camera via his trusty GoPro HERO7 camera. It’s certainly a case of being ready to film at the right time, and this once-in-a-lifetime seal slap certainly makes for a hilarious and memorable moment.

As expected, the internet loves it. Though most people aren’t quite sure if they’re the seal or the guy.

Me: Guy in kayak.

I strive to be the seal, but today I am the dude in the kayak https://t.co/VI7XVAljql via @Y7News

"Found your octopus, now give me my kayak" #GoProHERO7

This seems like a plausible explanation, but we prefer to think the seal is just being sassy.

most likely the sea lion is trying to kill the octopus before eating it, and the kayak is just a convenient hard surface to slap it on

Even after seeing it a number of times, the video continues to be amazing. You really need to watch it a few times to take it all in. First, everything is calm, beautiful and blue out there in the water. Then, the seal pops up, wildly jerking around, with a perfect slap to Mulinder’s face, as if it were rehearsed. It doesn’t get much better than this, people.

“We were just sitting out in the middle of the ocean and then this huge male seal appeared with an octopus and he was thrashing him about for ages,” said Mulinder, speaking to Yahoo7 News.

“That was mental!” squealed one of the kayakers in disbelief, as the entire crowd dissolved into laughter, following the seal’s path around them in the water. The seal reappeared, surfacing without the octopus, having presumably killed it after causing the major scene.

Whatever happened underwater stays underwater. Until it’s time to slap a human in the face with an octopus.