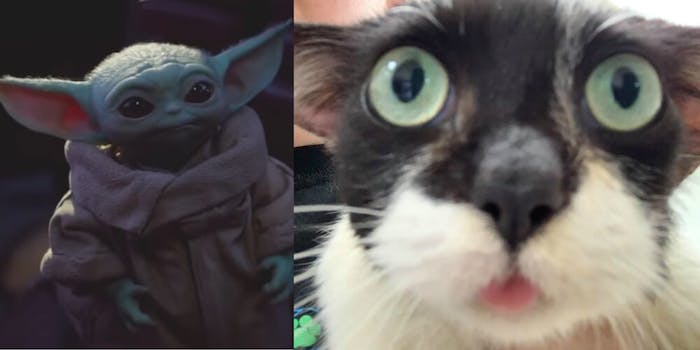 Rescue cat goes viral for being a Baby Yoda lookalike

It's in the ears.

Baby Yoda has come to life—in the form of a small rescue kitten, that is.

A North Carolina shelter cat has captured the hearts and minds of internet users across the country for its resemblance to the character in the Star Wars Disney+ series, The Mandalorian.

According to the Facebook page for “Baby Yoda Cat,” a volunteer brought the kitten—whose real name is J0y—to Cabarrus Animal Hospital on Dec. 15. The kitten was given the nickname due to her tilted ears that give her a very Yoda-like appearance.

Joy is thought to be 1 to 2 years old, according to CNN.

“She is being treated for a deep wound around her neck, as well as an upper respiratory infection,” the Facebook post about Baby Yoda Cat reads. “She also came in with some hair loss due to precious wounds, fleas and intestinal parasites.”

In a separate Facebook post, the Humane Society wrote that Joy won’t be up for adoption until she’s fully recovered. Still, it encouraged people wanting to help the cat to donate in order to contribute to her medical bills.

Update: It is with heavy hearts that we announce that Joy is no longer in our care. Joy was released without our…

Nancy Rominger, a volunteer with the HSRC, told BuzzFeed News that Joy has been friendly and affectionate.

“She’s doing much better, but it’s going to be a while yet,” Rominger said.

According to BuzzFeed News, a Cabarrus Animal Hospital employee is fostering Baby Yoda Cat until she recovers. Once she is fully healed and has been spayed, she’ll be available for adoption, BuzzFeed News reports.

“She’s very cuddly, she’s very affectionate, and she’s very sweet,” Rominger told CNN. “Her experiences have not made her into an attack cat. She seems to like people and loves being in laps. She’s going to make someone a very nice pet.”