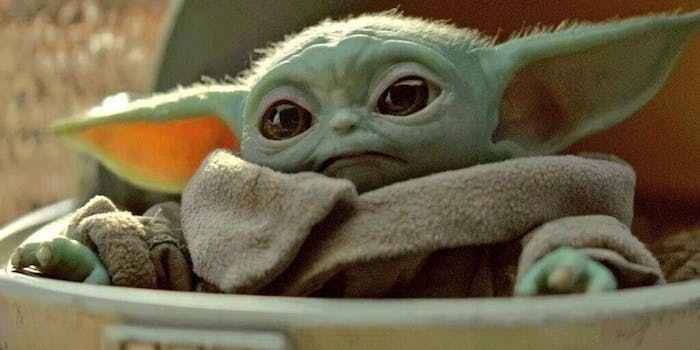 This article contains spoilers for The Mandalorian.

There’s a lot of big-name content on Disney+, including most of the Marvel cinematic universe, Disney classics like Snow White and The Little Mermaid, and the entire Pixar catalog. But one particular series seems to have captured people’s imagination: The Mandalorian, an original show set in the Star Wars universe.

The show’s titular character is a bounty hunter, and in the first episode, he’s hunting for a 50-year-old creature who, we see at the end, turns out to be an infant. An infant who looks a lot like a baby version of a certain Jedi master.

Since The Mandalorian takes place five years after the Yoda’s death in Return of the Jedi, he can’t actually be the Yoda, but he does appear to be the same species as him, or perhaps even a clone.

Still, the internet dubbed the creature “Baby Yoda” in November 2019, and we never looked back. Disney has referred to him as “The Child” in merchandise and marketing, but in season 2 of The Mandalorian, the baby’s name was revealed to be Grogu.

You can check out our deep dive into who the little creature might be, but in the meantime, let’s take a look at some of the memes and jokes it immediately spawned.

1) Baby Yoda inserted in other memes

Baby Yoda has been photoshopped into countless other memes, including the one of Pope Francis “holding up” objects, the “woman yelling at cat” meme, and the “Ok, Boomer” meme.

2) Memes about different types of Yodas

If there is a Baby Yoda, does that mean there are other Yodas?

Early on in the first season of The Mandalorian, Baby Yoda/Grogu is seen sipping from a cup of soup loudly while his dad, Mando, fights with Cara Dune. The scene created a perfect GIF and meme.

In an episode of the first season of The Mandalorian called “The Reckoning,” The Client (Wener Herzog) makes a simple request after Mando secures the Asset (Baby Yoda): “I would like to see the baby.”

A screengrab of Herzog with the quote spread like wildfire as a relatable meme. Yes, we would all like to see the baby, too.

On Nov. 27, the world learned Baby Yoda’s real name: Grogu. After a year of the internet knowing him as a Baby Yoda, the internet responded to the name with memes. Naturally, fans will still keep calling him Baby Yoda.

Early on in season 1 of The Mandalorian, Baby Yoda looks up at his adopted dad after chowing down on a frog. He resembled a kid waiting to tell a parent or adult something. The meme format was soon remixed and edited, and we got versions like this NYC Baby Yoda in a North Face parka, Airpods, and Timbs.

When Grogu sits on the Seeing Stone to attempt to reach out to a Jedi through the force, he looks absolutely peaceful. So, naturally, the scene became another meme format.