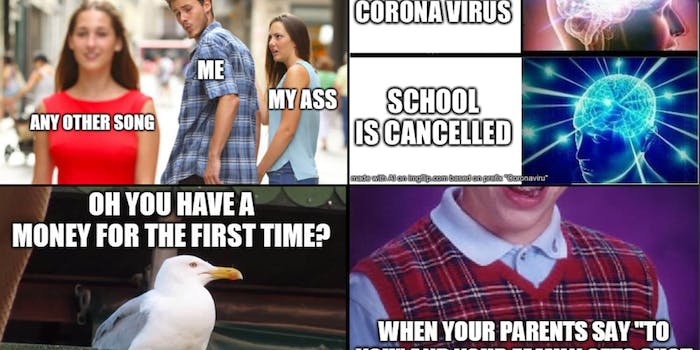 The machines have learned our meme-making ways.

A new website that uses artificial intelligence to generate memes is exploding in popularity.

The site, known as “This Meme Does Not Exist,” uses software that was fed the internet’s most popular memes in order to automatically generate countless versions of its own.

The site allows users to choose from 48 different meme templates. Once a meme is picked, the AI simply fills in the needed text.

Users can even input text of their own, which will spur the software to fill out the rest of the meme with “character-level prediction.”

Since the tool is based on actual memes, the results are a stark if not hilarious reflection of society itself.

Given the current global pandemic, and perhaps the current generations dark humor, many of the memes related to death and the coronavirus.

Straight people also seemed to be a reoccurring theme.

While not all the memes make sense, a lot sure seem to sense the current state of the world.

At some point, it appears the AI may have even become self aware, generating memes about memes in the process.

The site is similar to others that use deep learning to generate all sorts of images from actual people to cats.