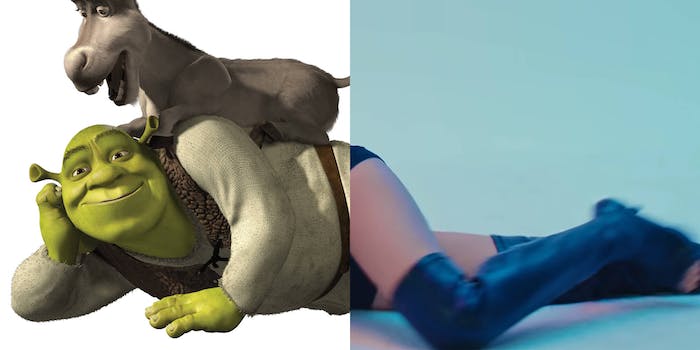 It doesn’t matter who you are: If you’ve ever wondered whether you could rock a pair of thigh-high boots, a new Twitter meme is here to encourage you with a resounding “yes.”

Over the weekend, Twitter users began circulating a grainy screenshot of a pair of legs that, miraculously, fit with the torso of nearly any celebrity—particularly men. These Twitter users all had one question: “Did it work?” And, indeed, it did. All across the board. Shirtless Jeff Goldblum? Check. Baby-faced Timothée Chalamet? Totally. Shrek? The boots fit like a dream.

So many people participated in the “Did it work?” meme that it became its own Twitter moment. As this pair of ubiquitous, black-booted legs set social media ablaze, spectators naturally wanted to know: Just whose legs were they?

Thankfully, answers are never far away on Twitter. It turns out the heavily memed legs belong to Lisa (Lalisa Manoban), a Thai singer and rapper who is a member of South Korean girl group Blackpink. The screenshot was taken from a dance video titled “Lili’s Film #3” that was uploaded to YouTube on April 20.

“Lili’s Film #3” has already earned more than 15 million views, which is no surprise, considering Blackpink’s “Ddu-Du Ddu-Du” became the first video by a K-pop group to earn 1 billion views back in November.

Blackpink has steadily built its North American presence over the last few years, making its U.S. concert debut at Coachella 2019 and collaborating with Lady Gaga on her forthcoming album, Chromatica. Now, thanks to Lisa’s world-renowned thigh-high boots, the quartet can add one more title to its impressive resume: meme queens.