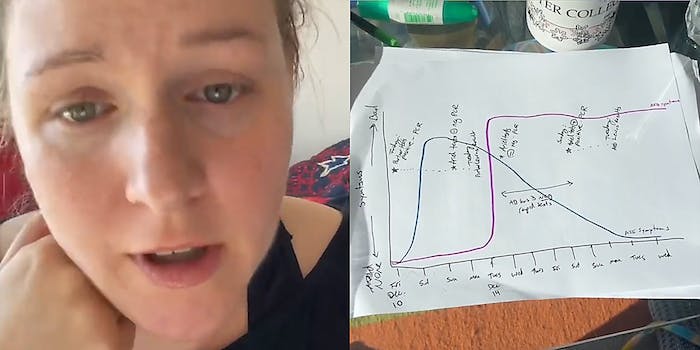 Amid the Omicron surge, which began to spike in New York City this month, testing lines and longer waits for COVID-19 test results are causing New Yorkers to receive test results two or three days after they swab their noses. But Ariel Dumas, head writer for The Late Show With Stephen Colbert, also showed in a TikTok that it took 11 days combined for her to test positive and receive her testing results after her partner, who she lives with, tested positive.

Her partner tested positive for COVID on Friday, Dec. 10, she says, but he didn’t get his results until Dec. 14—though he started showing symptoms after the 10th. Dumas tested negative on Dec. 13, Dec. 14, and multiple more times in the days following, even though she had begun to show symptoms.

“That’s a full 11 days after my partner tested positive,” Dumas said in the TikTok. “Moral of the story, if you think you have a bad cold, you don’t. You have COVID. The reason you’re testing negative is probably because your viral load is not beefy enough to show up on a test. Keep testing.”

The video went viral on Twitter, too. Dumas replied to it clarifying that she and her partner are both fully vaccinated and boosted.

And Dumas’ experience isn’t unique: Epidemiologist Michael Mina posted an infographic addressing the question of how rapid tests stack up to Omicron.

Mina tweeted that people “staying negative in the first days after they have symptoms,” which was Dumas’ experience, is “expected.” Mina added: “Symptoms don’t [equal] contagious virus.”

The infographic states that “symptoms are often a result of the immune response (not the virus).”

“The fast immune response elicited by vaccines helps suppress the virus for a day or more before the virus is either cleared or grows high,” Mina writes in the infographic. “A test designated to detect infectious levels of virus will be negative for 1-3 days of symptoms before the virus grows high.”

In an interview with NBC’s Today show, Centers for Disease Control (CDC) Director Dr. Rochelle Walensky acknowledged that the CDC has “more work to do” with regard to making sure that “adequate” testing is available.

In the meantime, she stressed the importance of masking indoors as a “prevention intervention.”

The Daily Dot has reached out to Dumas and Mina.