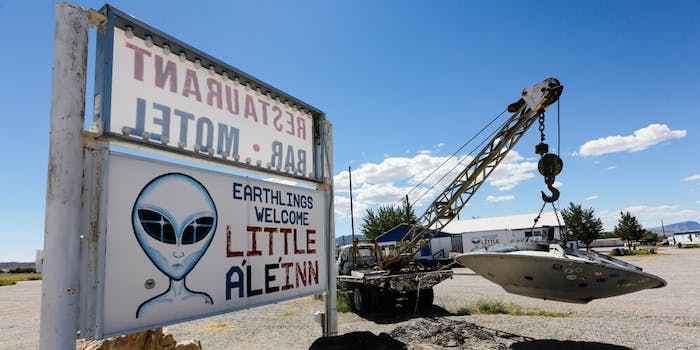 Despite legal threats and drama, the Area 51 desert event is on

The 'raid' was a bust, but the 3-day festival is happening—with or without little green men.

The life cycle of a meme is fairly predictable. Usually, it goes something like this: an image, phrase, or an image paired with a phrase gains traction on a site like Reddit before branching out to Twitter and Instagram. Then the meme might turn a profit, as people buy merchandise or even ink the meme onto their bodies. After that, the meme fades into the background as new memes emerge. The collective attention span of the internet is short, and at least a couple of memes go viral every week.

“Storm Area 51,” a Facebook event started as a joke in July that launched three separate events in Nevada this weekend, doesn’t follow any of these typical patterns. The Facebook event, originally created by 21-year-old Matty Roberts, invited people to raid the classified government base in the desert to “see them aliens” on Sept. 20. Area 51 has sparked conspiracy theories for decades about the government hiding proof of extraterrestrial life. While the government officially recognizes the existence of Area 51, the rumors about aliens have stayed just that: rumors. The research site, instead, is most likely being used for the testing of different military aircraft and various other technologies.

But that didn’t stop the Facebook event from turning into a meme about all the different things people were going to do at the proposed raid. There were memes about people running past the gate to the facility with their arms stretched back behind them—like the lead character from the anime series Naruto. There were memes about people taking home an alien. And then there were memes about the government shooting trespassers at Area 51—which is the most likely outcome for people trying to storm the heavily guarded facility. Although Storm Area 51 memes were all over the internet, most people thought the IRL event was not going to happen.

The number of attendees who checked “going” on Facebook, though, was hard to ignore: more than 2 million. That’s when Roberts decided to turn his joke into a real event. Called Alienstock, the free event was promoted as a music and art festival for like-minded believers. It was set to take place in Rachel, Nevada—the closest town to the facility and home to the Little A’Le’Inn. Reservations at the inn, as well as nearby Airbnb homes, quickly filled up. “Storm Area 51” was actually happening. But earlier this month, many thought it was canceled after Roberts cut ties with the other organizers of the event. He called it “Fyre Fest 2.0,” with a “lack of infrastructure, poor planning,” and numerous safety concerns. He then launched a different event in Las Vegas, Nevada. While Storm Area 51 doesn’t look like it will be another Fyre Fest—the disastrous event that prompted documentaries from both Hulu and Netflix—it’s causing just as much drama.

Josh Chouinard really wants people to know that the Alienstock event in Rachel is still happening. On Sept. 12, he posted a video to his band’s Instagram page telling followers that the event was indeed still a go. Chouinard is a drummer in the Portland-based rock band the Weird Kids. It’s a band you likely weren’t aware of until now, and that’s exactly why the four-person group decided to cancel a planned tour in the Midwest to play at Alienstock.

“We’re just embracing it,” Chouinard told me in a phone call. “We’re trying to get more of an online following, and this is a great way to do that.”

Chouinard, along with his bandmates—Adam Brooker, Isaac DeRosa, and Nick Roberts—flew into Las Vegas and are driving to Rachel on Friday. They will play two sets, one late on Friday night, and one on Saturday afternoon. To the Weird Kids, the opportunity to play at an event that is getting a lot of publicity was too good to pass up. “We are all stoked,” said Chouinard.

The Weird Kids aren’t the only band that had to clarify that the Rachel event was not canceled. Logan Pace, who is in the Boulder, Colorado, band Sad Bug with lead singer Rane Miranda, said in an email that “we hoped that all the buzz would help promote it but it was a bit of a bummer when the original creator lied about the event to make it seem like it would be a disaster,” referring to Roberts.

Sad Bug is performing on both Friday and Saturday. Pace said that, so far, the event is well-organized. “We were promised parking, restrooms, security, medical tents, water, food trucks, and waste management, and all of that is here. There’s a bunch of people here and they’re managing the camping really well. Everything is running smoothly.”

#AlienStock is not cancelled! My band is playing on Friday at 2:00pm 👽👽

After Roberts pulled out of the original Alienstock, the website for the event redirected to the new event at the Downtown Las Vegas Events Center. But Connie West, the owner of the Little A’Le’Inn, where the original event was set to take place, decided to go forward with the event at her alien-themed inn. The dispute led to Roberts hiring a lawyer to send West a cease and desist letter, which states: “You aggressively attempted to take complete control of the event—an event that indisputably is only occurring because of my clients’ idea and intellectual property.” The letter goes on to urge West to cancel the event completely and stop promoting it. Roberts did not respond to a request for comment for this story.

Despite the legal threat, the three-day event in Rachel is still set to begin Friday as planned—one day after Roberts’ one-day Las Vegas event. In an interview with a local news outlet, West said she was feeling “fabulous” about the event but noted that some attendees had backed out due to “all the confusion and upset.” She said in the interview that more than 250 people purchased campsites for the weekend and that there were people coming in from all over the world.

“No matter what, it’s going to be a great party,” West told the Las Vegas Review-Journal in a video interview last week. “It’s going to be what I can provide under the circumstances.”

Another event, at the Alien Research Center in Hiko, Nevada, is also planned for Friday and Saturday. Called “Area 51 Basecamp,” the event features live music and talks from “ufologists”.

While the event led by Roberts was kicking off in Vegas on Thursday night, dozens of people actually showed up for the “raid” at the Area 51 entrance. And while it’s obvious that none of them got into the facility, they dressed up in costumes and held signs that referenced memes, like “clap alien cheeks.” While 2 million people originally RSVPd “yes” to the raid, less than 100 showed up. It appeared tame—nothing like people had originally feared when preparations for a real event had begun.

Storm Area 51, and its surrounding events, isn’t another Fyre Festival. If anything, it’s much more comparable to Burning Man—but the aesthetic appears less Mad Max, more casual Halloween party. Until the weekend is over, it’s unclear if the whole slate of Area 51 events can be called a success. Right now, all we can say is that a meme successfully brought people together from all over the globe. Whether or not alien life exists, at least they found each other.