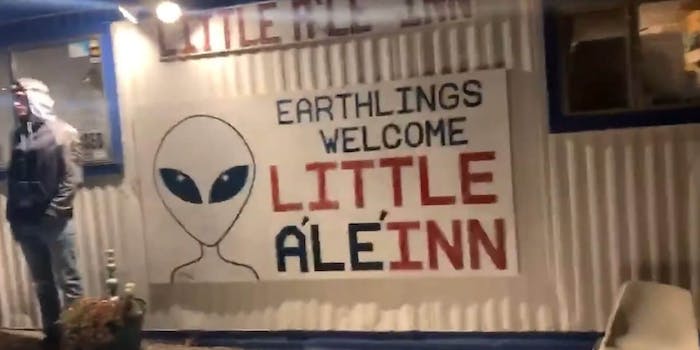 Hundreds of thousands of people are clicking.

The Facebook user who originally urged the online world to storm Area 51 has distanced himself from the event. But YouTubers are taking full of advantage of all the alien hype.

Creators have shown up in the Nevada desert, and people are clicking by the hundreds of thousands.

The “Storm Area 51, They Can’t Stop All of Us” Facebook event was created in June by a 21-year-old named Matty Roberts, and millions said they were either going (or interested in going) to the brouhaha. The ordeal inspired tons of memes. But Roberts backed away from some components of the event—which was reorganized to be the Alienstock music festival—after it became clear to him that it could be a debacle in the making.

That hasn’t stopped YouTubers from filling their channels with other-worldly content.

A YouTube channel called Isaiah Photo—which has about 42,000 subscribers—racked up nearly 900,000 views on a video titled “Area 51 Live The Alien Raid” in the six hours after his stream ended, while a pair of videos from TracE (less than 2,000 subscribers) accumulated more than 300,000 views over the course of about six hours.

The Life OD channel compelled 117,000 people to click on their video “We are the first to raid Area 51,” and the Adi Fishman channel (980,000 subscribers) put out a pair of videos about “trying to sneak into Area 51” and received a combined 300,000 pageviews as a result. YouTubers didn’t even need to be in Nevada for people to click on their work as long as they tagged content correctly. The MrTop5 channel (3.1 million subscribers) played Fortnite in a video called “I Pretended To Be An Alien in Fortnite (Area 51)” and got nearly 200,000 people to watch in less than a day.

Not every YouTuber has been successful at navigating the Area 51 story, though. A pair of Dutch YouTubers named Tie Granzier and Govert Sweep—who have more than 1 million subscribers between them—were arrested near the area earlier this month with cameras, drones, and a laptop. They later pleaded guilty to misdemeanor trespassing and illegal parking.

Whether these YouTubers’ streams are real or fake doesn’t seem to matter much to viewers, who click on them anyway.

Even though there’s been so much online interest in the Area 51 event, the vast majority of people who said they would attend didn’t make it. Luckily for them, plenty of YouTubers did—and were ready to document everything that happened while building their brands.